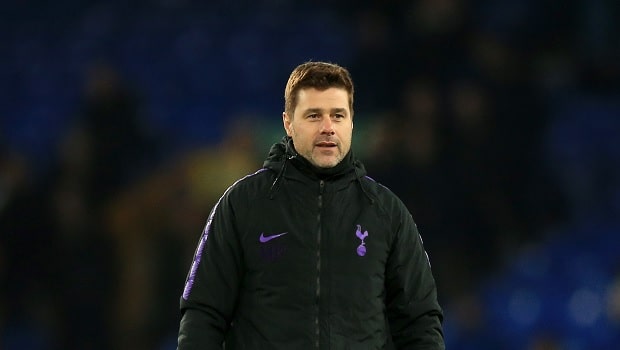 Mauricio Pochettino insists Tottenham will not be distracted by speculation linking him with a move to Manchester United next summer.

The Spurs boss says everyone at the club will focus intensely on becoming genuine title challengers this season.

Pochettino was talking after his side had hit Everton for six at Goodison Park on Sunday afternoon, coming from a goal down to run out impressive 6-2 winners.

Son Heung-min and skipper Harry Kane both bagged braces while Christian Eriksen and Dele Alli were also on target for Spurs, with Theo Walcott and Gylfi Sigurdsson netting for the home side.

Pochettino has been touted as the key target in United’s search for a permanent successor to Jose Mourinho, but he says that won’t be on his mind while he attempt to make Spurs title challengers.

“Talking about rumours, there are a lot of rumours,” said Pochettino. “This guy [Spurs’ press officer] became upset again or angry [by questions about United], but we cannot talk, we need to be focused on our jobs at Tottenham and do our best to try to be successful.”

Tottenham have work to do if they want to make it a three-way title race, according to their Argentine boss. “I still believe Liverpool and Manchester City are the real contenders and favourites to win the Premier League,” he added.

“We are there, but [so are] Chelsea, Arsenal and Manchester United. I think there is still a long way for me to say we are real contenders.

“Football is about being consistent of course. If we are able to be consistent and play in the way we did tonight I think yes maybe we could then be a real contender, but there is still a long way.”

Tottenham are 21.00 to win the title this season. They are currently third, six points behind leaders Liverpool.