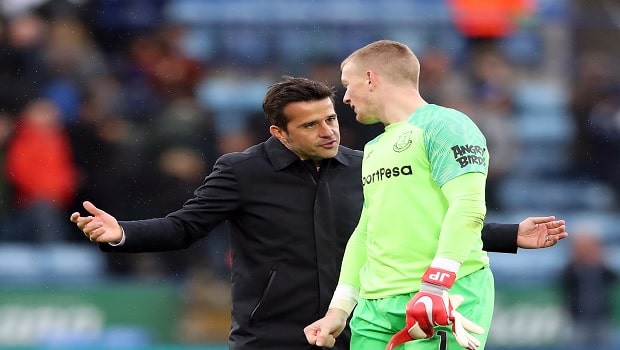 Marco Silva felt there were no excuses after Everton conceded six goals at home to Tottenham in the final act of Premier League football before Christmas.

The Toffees led early through Theo Walcott’s first goal in four months but an error from goalkeeper Jordan Pickford allowed Son Heung-min to level the game.

From there Spurs took control, with Dele Alli and Harry Kane giving them clear daylight before half-time. Christian Eriksen added a sumptuous fourth after the break and, while Gylfi Sigurdsson quickly responded, there were further goals from Son and Kane as the Londoners completed a rout at Goodison Park.

“Really bad afternoon for us, really bad result for us as a team and our fans,” Silva said. “We have to realise why and we will for sure. We started the match well and we scored.”

Everton are in 11th place with 24 points going into Christmas, a worse position than last year when they were ninth with 26 points and already on their third manager as Sam Allardyce steered the ship following the departures of Ronald Koeman and caretaker boss David Unsworth.

Silva felt the disallowing of Dominic Calvert-Lewin’s header with the score at 1-0 was pivotal, though he wasn’t going to hide behind that call.
“We scored a second goal, in my opinion, but talking about the ref is not my way and I don’t look for excuses,” he added.

“I didn’t see nothing [wrong], the match would have been really different. “We made the first mistake in the match when they equalised and the game changed completely.”