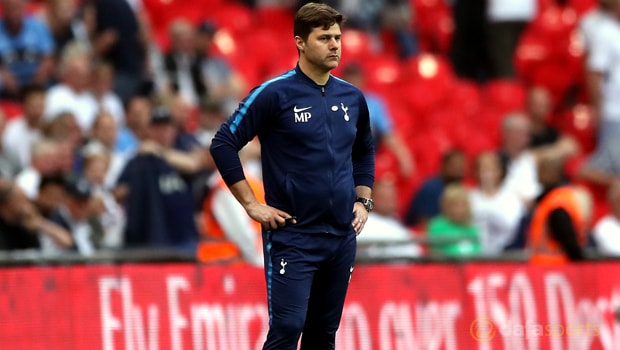 Tottenham Hotspur manager Mauricio Pochettino says it is up to chairman Daniel Levy whether he is offered a new contract or not.

Pochettino currently has three years left on his deal at Spurs but, after almost four seasons with the club, he has been unable to deliver any silverware, leaving slight doubts over his future.

Tottenham have come close to winning trophies under the Argentine, having lost out to Leicester City in the race for the Premier League title in 2015/16 whilst recently being knocked out of the FA Cup semi-final by Manchester United.

Spurs also reached the last-16 of the Champions League this term and looked to be on course for a quarter-final spot before Italian champions Juventus staged a late comeback in the second leg.

Pochettino’s men are being described as the nearly-men for the succession of near misses and it is unclear whether the manager will be offered an extension to his current deal.

When asked about his future, the 46-year-old was coy about his hopes of staying and insists the only person that matters in these negotiations is Levy.

“Am I going to sign? It’s a question for Daniel. I am not (Arsene) Wenger or (Sir Alex) Ferguson who decides about their own future. I decide only about the starting XI in this football club,” he was quoted as saying by Sky Sports.

“That is up to Daniel, does he want to offer or not? I am a person who is never going to ask to improve my salary or extend my contract, or anything like this.”

Paris Saint-Germain are looking for a new manager ahead of next season after Unai Emery confirmed he would be leaving this summer and Pochettino could be a candidate to take over at PSG.

Spurs are in action on Monday night when they welcome Watford to Wembley and the hosts are firm 1.17 favourites to win, a draw is priced at 7.50 whilst the Hornets are massive 15.00 outsiders.