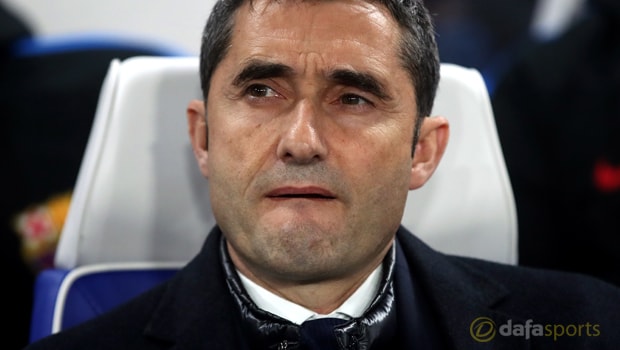 Ernesto Valverde says Barcelona have lacked that little bit extra on occasions this season but he is delighted nonetheless after La Liga glory was clinched on Sunday.

Barcelona made the trip to the Abanca-Riazor knowing all three points would deliver the league title and the visitors made the perfect start when Philippe Coutinho opened the scoring after just seven minutes.

Argentina international Lionel Messi then stole the show as he bagged a hat-trick, helping the Catalans to a 4-2 victory and a seventh La Liga crown in the past 10 years.

Unfortunately, defeat means Deportivo will be spending next season in the second tier of Spanish football and that has wrapped up the relegation places already, with Las Palmas and Malaga also down.

Valverde has now completed a domestic double in his first season at Camp Nou, having also won the Copa del Rey, but there is still a sense of disappointment after the Champions League quarter-final exit to Roma.

The 54-year-old, although happy after winning the title, admits there have been situations during the campaign where his players have been unable to turn up the heat on their opponents.

“When you chase it all season you say finally. The league is very long. It is not decided only in a match,” Valverde said.

“From the beginning we have been in the lead. In the end we were the best. The hard part is winning and winning.”

“I have not invented anything, in the end these players have already won titles and leagues with other coaches.

It’s more of them than the coach. We have been a competitive, compact team and we have overcome many difficulties, and in moments I know it has lacked brilliance.”

Next up for Barcelona is the smaller matter of a home clash rivals Real Madrid on Sunday and the hosts are 1.75 favourites to pick up the win, a draw is priced at 3.80 whilst Los Blancos are the 4.33 outsiders.