Mauricio Pochettino hasn’t given up on Spurs ‘dream’ 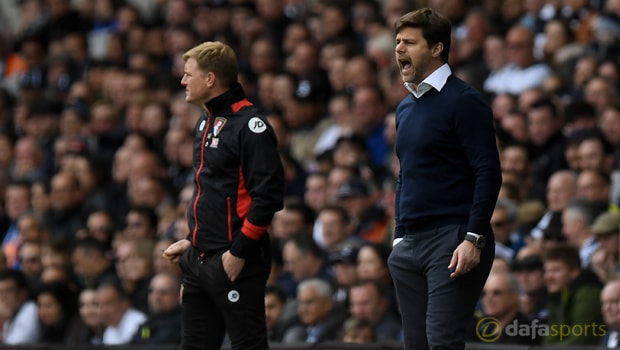 It was the second time in seven days that Spurs had romped to a four-goal success at White Hart Lane and leaves the pressure squarely on Chelsea’s shoulders ahead of a showdown with former boss Jose Mourinho and Manchester United on Sunday.

Tottenham fans will be pinning their hopes on the Red Devils denting Chelsea’s momentum, and Pochettino says they are happy to retain believe in the title dream for now.

“At the end of the season when everyone is tired, we need everyone to have the right mental attitude and happiness helps.

We now need everyone to rest and get ready for the next few games,” he said.

“The three points are very important to keep our dream.” Harry Kane was on the scoresheet for Spurs, starting his first game after injury.

Mousa Dembele had opened the scoring after six minutes in a game where Spurs were never threatened.

Pochettino hailed his goalscoring strikers and he was especially happy to see Janssen getting the monkey off his back.

“Harry Kane is a fantastic player – he is one of the best in England and it is fantastic he is fit again to help the team,” said the Argentine.

“Son is brilliant – he needed time to adapt his game but he is now fit and healthy and he is feeling really comfortable.

“I was happy for Vincent Janssen because I knew it was his only chance to score and it’s important he feels the happiness when you score.”

Spurs can now shift the focus towards next weekend’s FA Cup semi-final showdown with Chelsea at Wembley. They are 2.88 to win that game in 90 minutes and 4.50 to lift the FA Cup this season.