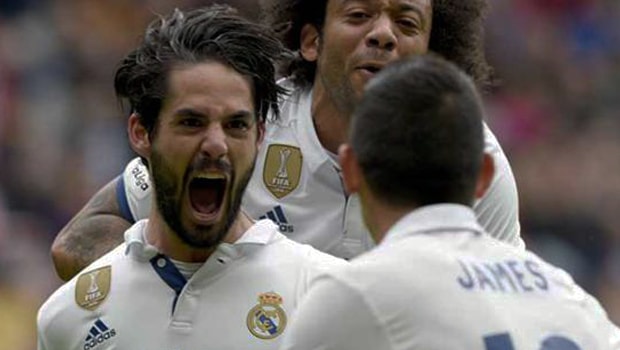 Real Madrid coach Zinedine Zidane said Isco had shown ‘he belongs’ at the club after he struck twice in the Liga leaders’ 3-2 win at Sporting Gijon on Saturday.

Zidane made nine changes for the trip to Gijon, which came in between their Champions League quarter-final ties against Bayern Munich.

Cristiano Ronaldo, Luka Modric and Toni Kroos were all amongst those left out following the 2-1 win in Germany in midweek and it looked like it might backfire as the home side twice took the lead.

Sporting went ahead through Duje Cop only for Isco to equalise almost immediately, but they led again early in the second half thanks to Mikel Vesga.

The win ensured Real Madrid stayed three points clear of Barcelona at the top of La Liga – the Catalans also winning 3-2 against Real Sociedad later in the evening.

“Isco played a great game and deserved to give the team the victory,” said Zidane afterwards.

“I am happy with how he played – he made the difference. I am happy for him. He has the personality to do what he did today.”

Real Madrid and Barcelona clash next weekend and Zidane says Isco is one of 24 players in his squad that would be considered certain starters at any other club.

He admits it is not easy trying to balance everybody’s aspirations but the French coach says Isco belongs amongst his galaxy of stars.

“I feel unfair to all those who do not play,” add the coach.

“That will always happen as I have 24 players who would be starters at any team other than Real Madrid.

But that is the difficulty of this job. “But he is a great player – he has shown that.

Real Madrid is where he belongs.” Real Madrid are 2.30 to beat Bayern Munich in their second leg at the Bernabeu, while they are 3.00 to retain the Champions League.