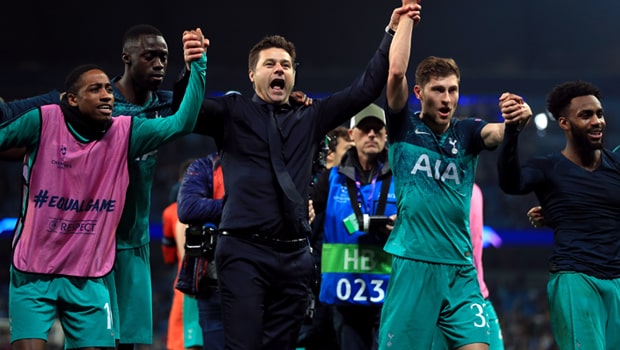 Manager Mauricio Pochettino paid tribute to his “heroes” after Tottenham emerged from a whirlwind Champions League tie with an away-goals win over Manchester City.

Spurs had arrived in Manchester with a one-goal lead from the first leg but the first 21 minutes wiped that out.

Raheem Sterling scored after three minutes for the hosts, only for Son Heung-min’s quick-fire brace to see Spurs lead on the night before 10 minutes had elapsed.

Bernardo Silva’s deflected effort found the net for City just over a minute later and, on 21 minutes, Sterling scored again to make it 3-2 on the night to Pep Guardiola’s team.

Sergio Aguero put City in front in the tie for the first time just before the hour mark before Fernando Llorente bundled home for Spurs with 15 minutes remaining.

His goal only stood after a VAR review and, incredibly, the technology was on hand again deep into stoppage time to correctly rule out what seemed a dramatic City winner from Sterling.

Spurs held on, with the tie ending 4-4 on aggregate, to reach the Champions League semi-finals for the first time in their history.

“It was unbelievable, the way it finished. I am so happy, so proud. My players are heroes to be here,” said Pochettino.

“In a moment many things happened in your head. The disappointment was massive but they changed the decision.

“That is why we love football. Today we showed great character and great personality. It was an unbelievable game.”

Spurs will face Ajax in the last four and the north Londoners are now 4.50 to win the Champions League this season. Liverpool, meanwhile, will face 2.50 tournament favourites Barcelona in the other semi-final.