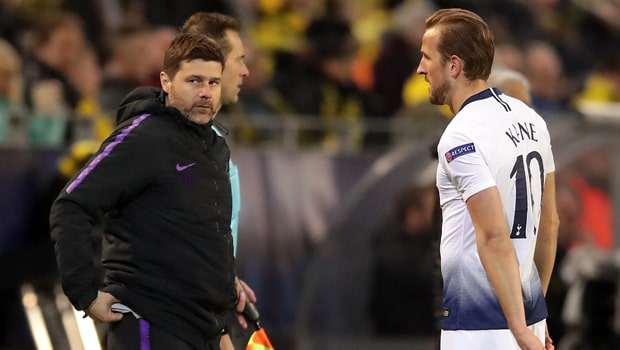 Mauricio Pochettino fears Harry Kane will miss the rest of the season with the ankle injury he picked up during Tottenham’s 1-0 Champions League victory over Manchester City on Tuesday.

Son Heung-min scored the only goal of the game as Spurs claimed a narrow first-leg lead in the quarter-final tie, but the gloss was taken off the win due to an injury picked up by England captain Kane.

The 25-year-old sustained the problem early in the second half when challenging for the ball with City left-back Fabian Delph and he was later seen leaving the stadium on crutches.

Kane picked up a similar injury to the same ankle against Manchester United in January and was subsequently out of action for over a month and Pochettino fears the forward’s latest problem could now bring his season to a premature end.

Asked whether Kane could miss the rest of the season, Pochettino said: “Yes. We need to check tomorrow but it looks the same, a similar issue.

“I’m very sad, very disappointed, and it’s going to be tough for the rest of the season.

“We hope it’s not a big issue but there’s not much time to recover. He’s twisted his ankle and we will see how he reacts in the next few hours.”

Kane’s potential absence will not only be a blow to Spurs’ hopes of progressing in the Champions League but will also dent their chances of claiming a top-four finish in the Premier League.

The north Londoners, who have finished in the top-four in each of the last three seasons and are priced at 1.40 to achieve that feat again this term, currently occupy fourth place, but are only a point clear of rivals Arsenal in fifth.

Next up for Spurs is a home clash with Huddersfield in the league on Saturday, before they turn their attention to the second leg of their Champions League tie with City at the Etihad Stadium next Wednesday.