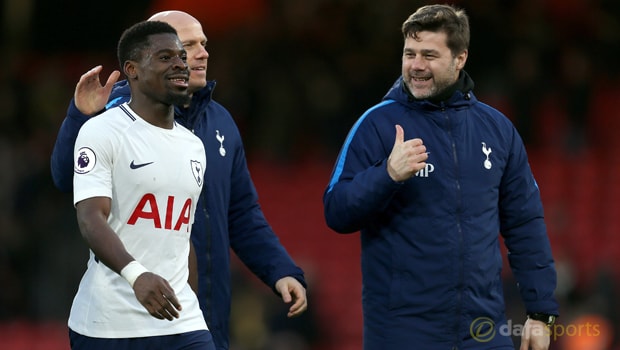 Tottenham coach Mauricio Pochettino was quick to praise his team’s response after their Champions League exit as they cruised past Bournemouth on Sunday.

Spurs went into the game at the Vitality Stadium in poor spirits after being knocked out of Europe on Wednesday by Juventus.

After going a goal down, Spurs then rallied without the injured Harry Kane to win 4-1 on the south coast. Heung-Min Son scored twice, while Dele All and Serge Aurier also found the back of the net.

Pochettino’s side climbed back into third in the Premier League table and the Argentinean was delighted to see his team force their way back into the race for the top two.

He told Sky Sports: “It was the perfect answer after a massive disappointment against Juventus. We concede the first goal, but I think the team was better than Bournemouth, and the attitude was great.

“After Wednesday, it was a massive challenge, the opponent is waiting for you, but the team showed great personality and character, and we fully deserved the victory.

“I think the target is to finish as high as possible, the possibility to fight until the end for one position. But it will be tough because there are massive sides fighting for the same positions.

“It’s a massive three points. We knew that the team was going to show the character and the personality after Wednesday. It’s nothing new for me, I believe, really believe in the squad and players.”

Spurs are next in action in the FA Cup against Swansea and they are 3.25 to go all the way and win the competition.