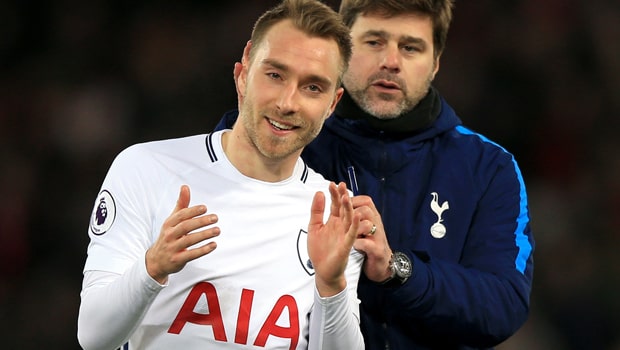 Mauricio Pochettino says he cannot be sure that playmaker Christian Eriksen will sign a new Tottenham contract.

The Denmark international has just 18 months remaining on his deal and has so far proved unwilling to commit in the manner of team-mates Harry Kane and Deli Alli, who both signed long-term contracts last year.

With the likes of Barcelona said to be interested, chairman Daniel Levy will not want his asset to go through another summer without a firm commitment but Pochettino says they are no closer to knowing what the future holds.

“No news is good news. Who knows? I am not a person who suffers too much in this type of situation, because football is dynamic,” said the Spurs boss.

“Football is about interests that sometimes as a manager we cannot manage. It depends on many things. Different parties have interests.

“Of course Christian Eriksen is so important for us and you would like to have this kind of player with you. But it’s a negotiation with different parties, with different interests.”

Eriksen has scored six times and assisted nine more goals for Spurs so far this season as they jostle with Liverpool and Manchester City in the title race.

Spurs have not won a trophy in 11 years but, according to their manager, winning a domestic cup competition this term wouldn’t alter where the club is seeking to go.

“For many people it’s so important for us to win. For me, of course it’s important, like for the players and the club, to win a trophy,” he added.

“But I’m not sure whether winning the Carabao Cup or FA Cup is going to change the character of the club.” Spurs are 4.50 to win the Carabao Cup this term and 8.00 to raise the FA Cup.