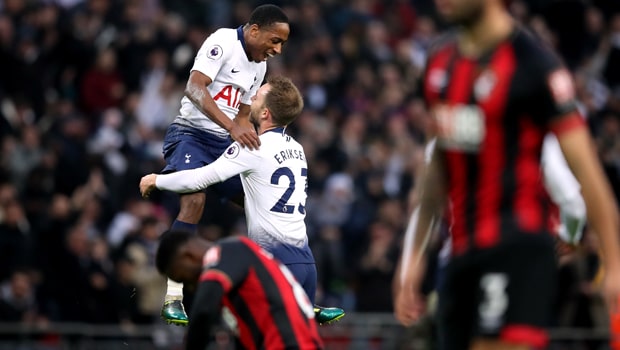 Tottenham boss Mauricio Pochettino has said Kyle Walker-Peters will be a big player in the future after starring in the victory over Bournemouth.

The 21-year-old made his first Premier League start of the season in the 5-0 win over the Cherries, a result that sent Spurs second in the table, six points behind leaders Liverpool.

After the youngster made a costly mistake against Barcelona in the Champions League, he demonstrated his potential, setting up the first three goals on Boxing Day.

Acting as a back-up to Kieran Trippier and with Serge Aurier recovering from injury, the second half of the season offers the chance for Walker-Peters to get more first-team experience, with Spurs still challenging in the Premier League, Champions League, FA Cup and EFL Cup.

Pochettino said after the win over Bournemouth: “I told you after the match in Barcelona that we really believe in him and he has amazing quality and only needs time to mature and show his quality.

“I’m so pleased, so happy, because I think his quality is going to help the team this season and for the future he’s going to be a very important player for Tottenham.”

Meanwhile, Pochettino played down Tottenham’s chances of competing for the Premier League title, insisting that Liverpool and Manchester City remain in prime position despite City losing three of their last four league games to slip behind Spurs in the table.

Spurs bid to strengthen their hold on second spot with games at home to Wolves on Saturday followed by a trip to Cardiff City on New Year’s Day.