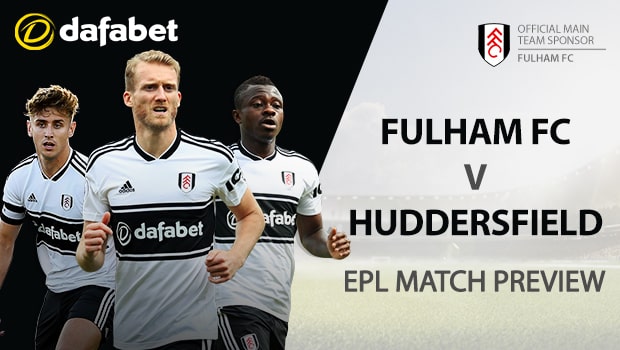 We’ll be tuning in to the action at Craven Cottage this weekend as Fulham and Huddersfield Town go head to head in Premier League action.

Betting on the Draw: Odds indicate there’s a 30 percent chance the match ends in a draw. There’s a draw in 27 percent of AccuScore sims, suggesting no added side value on the draw.

Last 6: Huddersfield Town has lost their last six games overall, most recently 3-1 to Manchester United on Wednesday. Fulham are coming off back-to-back draws vs Wolverhampton and Newcastle, respectively, with 3 draws and 3 losses overall in their last six.

Win over Wolverhampton: Ryan Sessegnon was Fulham’s only goal scorer in Wednesday’s match vs Wolverhampton. Sessegnon interestingly enough doesn’t show up on the top performer list in AccuScore sims for Saturday’s match.

Head to Head: These two sides met in November of 2018 when Huddersfield Town got the 1-0 victory.

Steve Mounié has close to a 25 percent chance to score for Huddersfield, averaging 1.96 shots overall per sim, 0.90 shots on goal per and 0.28 goals per sim.

Aleksandar Mitrovic has a 44-plus percent chance to score this weekend, averaging 2.84 shots overall per sim, 1.12 shots on goal per and 0.57 goals per sim.

Odds indicate there’s a 48 percent chance Fulham wins this match. That happens in 49.2 percent of AccuScore sims, suggesting some added confidence on the favorite. Fulham winning is a two-star (out of four) AccuScore hot trend pick.