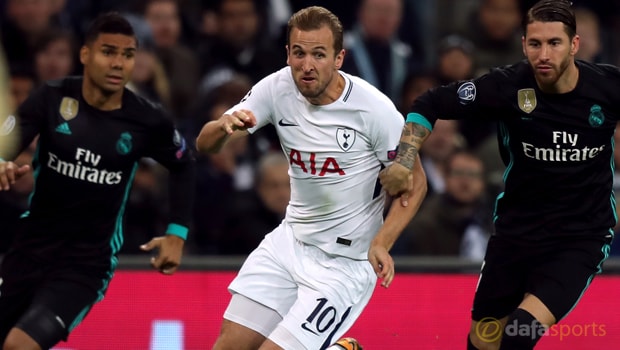 Harry Kane believes Tottenham can win the Champions League following Wednesday’s 3-1 win over Real Madrid but the striker says the whole squad must believe for his dream to become reality.

Tottenham went into the European contest on the back of consecutive defeats to West Ham United and Manchester United – those coming in the League Cup and Premier League respectively – but they returned to winning ways with a brilliant win at Wembley.

Madrid, who are aiming to win the Champions League for a third straight year, were poor at the back and talisman Cristiano Ronaldo was kept quiet for much of the game by a resolute Spurs defence.

Dele Alli opened the scoring on the 27th minute when sliding in Kieran Trippier’s cross – although replays showed the right-back was offside – before the midfielder then grabbed a second with a deflected strike in the 56th minute.

Christian Eriksen then made it 3-0 when rounding off a quick counter-attacking move before Ronaldo managed to pull one back for Los Blancos, who have slipped to second in the group.

Spurs, who have qualified for the knockout stage with the win, have now moved three points clear at the top of the pool and the English outfit are 1.10 favourites to win Group H while Madrid are priced at 5.25 to finish first.

England international Kane is already thinking about potentially lifting the trophy this season but he admits the belief needs to remain strong throughout the campaign.

“Definitely, why not? We’re not going to get too ahead of ourselves but we’ve got to believe,” he said.

“Four games in, we’ve qualified and we’ve got a good chance of finishing top.

I think everyone doubted us at the start of the group stage but for us, of course you’ve got to believe. “But there’s a long way to go.

We’ve played well in the last four games against tough opposition so we’ve just got to keep going, keep improving.”

Spurs are 17.00 to win the Champions League, Madrid are a 6.50 chance whilst Paris Saint-Germain are 4.50 favourites.