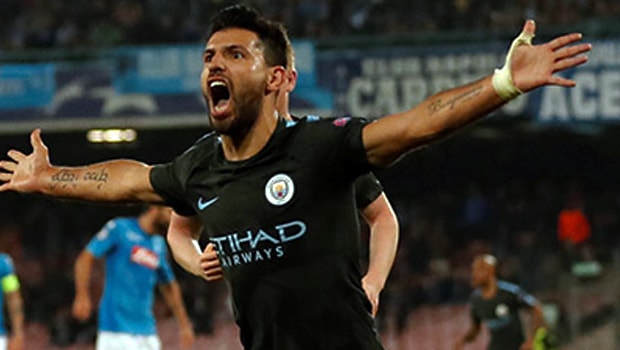 Argentina international Sergio Aguero says he won’t be letting up and will keep giving his all for Manchester City after becoming the club’s record goalscorer on Wednesday night.

Aguero secured a place in City history on Wednesday when notching his 178th goal for the club in the pulsating 4-2 Champions League victory away at Napoli.

The Citizens have won all four of their Euro games this season and the latest win has guaranteed a place in the knockout stage of the competition, although top spot in the group is not yet assured.

Shakhtar Donetsk are sitting in second on nine points, three behind City, and the two sides go head-to-head in a potentially crucial final group game in Ukraine on December 6.

Pep Guardiola’s side have been in blistering form this term and they are also unbeaten in the Premier League, winning nine and drawing one of their 10 matches to sit top of the table.

City are 6.00 to win the Champions League, just behind favourites Paris Saint-Germain at 4.50, while the blue side of Manchester are shortest odds at 1.20 to win England’s top flight title.

Aguero continues to be a shining light for the club and he insists he wants to keep adding to his scoring record in order to help the team achieve success on both the domestic and European stage.

“I am very happy for this moment but just keep going, I think I have to keep playing the same way because the season is long. We have a lot of games until December,” he said.