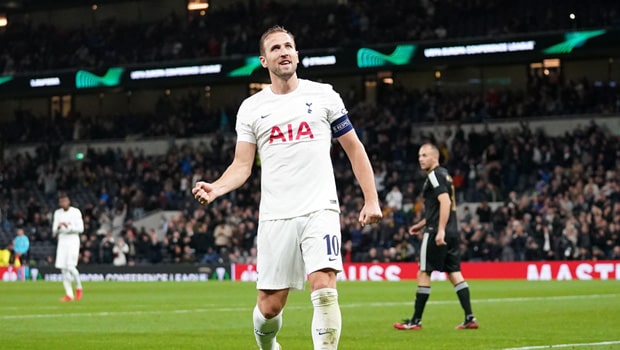 English striker and Spurs skipper Harry Kane came off the bench to help get past Mura in the UEFA Europa Conference League on Thursday evening.

The Three Lions striker spent less than 30 minutes on the pitch, but he was able to score three goals in 20 minutes.

A Dele Alli penalty in the 4th minute, as well as Giovani Lo Celso’s strike 4 minutes later had given Spurs the drive going into the second half, before Ziga Kous’ volley threw the game open just 8 minutes after the break.

This forced manager Nuno Espirito-Santo to introduce Harry Kane, Son Heung-Min and Lucas Moura on the hour mark and it paid off, with Kane getting his first goal of the game in the 68th minute.

His second came in 9 minutes later before completing the hat-trick with two minutes left on regular time.

The win helps Spurs put an end to a winless run of five games.

Manager Espirito-Santo revealed he would be taking a lot if positives from the game.

“We started very well, our dynamic was good. The beginning of the second half, they scored. After that we played good. A good game. It [the triple sub] was needed. The best way to prepare the players is to play. The minutes were important for the boys. A lot of positives.” Nuno Espirito-Santo said.

Meanwhile, in the UEFA Europa League, West Ham were comfortable in a 2-0 win over Rapid Vienna with goals from Declan Rice and Benrahma.

Leicester City were not that lucky after losing 1-0 to Legia Warsaw in Poland. The Foxes were without Kelechi Iheanacho and Wilfred Ndidi for the game.

The Nigerian forward had to return to the UK due to documentation issues, while Ndidi, albeit injured, would have missed out irrespective because he was getting sent off in the 2-2 draw against Napoli a fortnight ago.