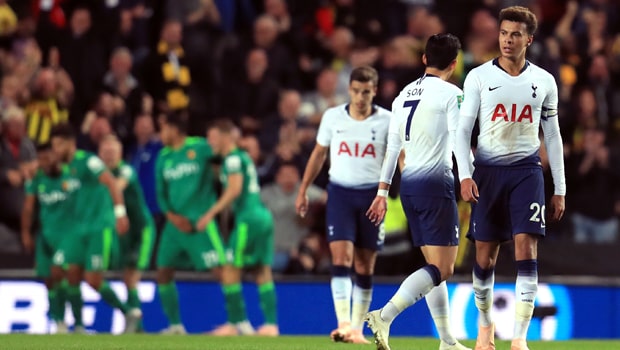 Dele Alli felt it was a ‘huge honour’ to captain Tottenham for the first time in their penalty shootout win over Watford at Stadium MK.

With White Harte Lane still not ready and Wembley unavailable, Spurs had to find an alternative venue to host the Hornets.

Alli scored the winning spot-kick as Tottenham progressed to the fourth round after a 2-2 draw, having also scored an 82nd-minute penalty to draw Mauricio Pochettino’s side level at 1-1.

Erik Lamela looked to have won it for Spurs four minutes later but Etienne Capoue levelled for ten-man Watford in the final minute.

Alli had the final say on what was a big night for the 22-year-old as he returned to his former MK Dons stomping ground.

He admitted it was a privilege that Mauricio Pochettino gave him the captaincy in the absence of regular skipper Hugo Lloris.

“It was good, it was a little bit too big for me but it was a massive honour for me,” Alli told Sky Sports.

“I spoke to the gaffer yesterday and he asked me if I wanted to be [captain] and it was a real privilege.

“I think it’s important when we’re out on the pitch that we know we need to have 11 leaders out there, but it was a huge honour.”

Alli remains unsure on whether his future will see him captaining Tottenham more often, but he vows to lead by example, regardless of who is wearing the armband.

“If you asked the boys about my speech before they might disagree, but I think I want to be a leader out there anyway and whether I’ve got the armband or not it’s important that that is my mentality,” he added.

Spurs are 1.44 to win away at Huddersfield in the Premier League on Saturday. The Terriers are 7.50 while the draw is priced at 4.50.