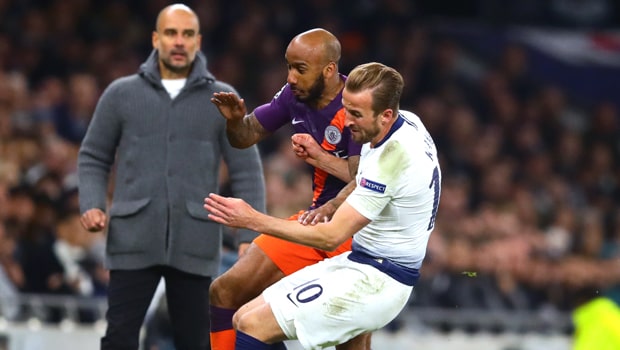 Tottenham and England are both reeling after the news Harry Kane has suffered a significant ankle injury that could bring his season to a premature end.

England captain Kane was forced off in the second half of Tuesday’s Champions League victory at home to Manchester City after falling awkwardly on his left ankle after attempting to block Fabian Delph’s clearance.

The 25-year-old, who has scored 17 goals from 28 Premier League appearances this season, was pictured leaving the new Tottenham Hotspur Stadium on crutches with his left foot in a protective boot and Spurs were hoping the initial diagnosis was not as bad as first feared.

However, the striker’s season looks like it could be over after his club released a statement on Thursday confirming the exact damage, although they did not provide a timescale on how long Kane will be out for.

The statement said: “Following assessment over the past two days, we can confirm that Harry Kane has sustained a significant lateral ligament injury to his left ankle following a challenge in our Champions League quarter-final, first-leg win against Manchester City.

“Investigations are ongoing and he will continue to be assessed by our medical staff over the coming week.”

Not only will Kane’s absence be a blow to Spurs and their chances of Champions League success, but it could also impact on England ahead of the Nations League Finals, which take place in Portugal from June 5-9.

The Three Lions are currently 2.70 favourites to win the tournament, Portugal are priced at 3.00 while the Netherlands and Switzerland are 4.00 and 7.00 respectively.