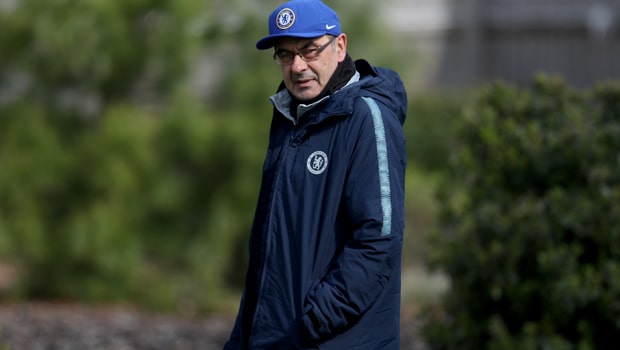 Chelsea manager Maurizio Sarri has warned his side against complacency after they managed to scrape a determined 1-0 victory at Slavia Prague in the first leg of their Europa League quarter-final tie.

Sarri decided to make seven changes from the side that beat West Ham United 2-0 on Monday night, with Eden Hazard and N’Golo Kante benched while Callum Hudson-Odoi was left out of the matchday squad entirely.

Chelsea lacked fluidity for the majority of the match and the only talking point in the first half was Brazil international Willian’s rasping strike from the edge of the box that rattled against the bar.

The home side had plenty of possession during the contest and they were able to force Kepa into two smart saves, the first coming from a 20-yard piledriver from Ibrahim Traore before Jan Boril’s acrobatic effort was well stopped.

Sarri’s side did manage to grab the only goal of the game on the 86th minute when Spanish left-back Marcos Alonso headed in Willian’s sumptuous cross when allowed full freedom of the penalty area.

That away goal could prove crucial for Chelsea ahead of next week’s return leg at Stamford Bridge, but the Blues boss has warned his side to expected another tough encounter against their Czech opponents.

“We need to think the second leg will be difficult because these opponents are difficult away. So we need to be careful,” Sarri said.

“We knew very well that here is difficult. “The opponents are very physical, they are very aggressive and so we knew very well we had to face difficulties during this match. We were able to suffer and I am happy with the result and the performance.”

Chelsea are 2.63 favourites to win the Europa League, while Arsenal, who beat Napoli 2-0 at the Emirates on Thursday night, are next in the betting at odds of 4.00.