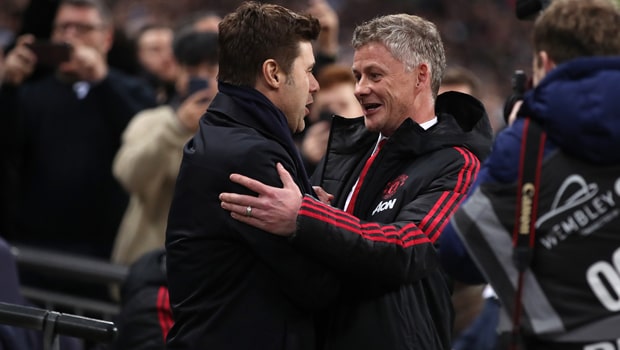 Mauricio Pochettino felt Tottenham’s second-half performance against Manchester United in the 1-0 loss at Wembley was the best they’ve played during his tenure.

Marcus Rashford’s first-half goal proved the difference between the sides, despite Spurs laying siege to the United goal in the second half.

David De Gea was inspired in goal for the Red Devils, the Spaniard pulling out a Premier League high of 11 saves in the second 45 minutes – a tally unmatched by any of his peers in 90 minutes this season so far.

Spurs had 14 attempts at goal after the break as part of 21 overall in the match, leaving their manager proclaiming his satisfaction despite a defeat that potentially ended their title aspirations for another season.

“It was an amazing second half, I am so pleased,” Pochettino told BBC Sport.

“Tottenham did everything to win the game. Maybe we dominated and we created a lot of chances.

“The team was fantastic. That is the best 45 minutes I have seen Tottenham play since I took in charge.”

The 1-0 outcome was tough on his side, according to Pochettino, but he suggested that sometimes in football you have to accept such things can happen.

“Sometimes you win a game and you are disappointed, like when we won 3-0 at Old Trafford [in the reverse fixture in August]. Today the result should be different and I am happy,” he added.

“That is the way that we want to grow and play – taking risks, playing football that we are going to play.

“Eleven saves from De Gea who was outstanding. He fully deserved to be man of the match.”

Spurs are now 34.00 to win the title this season following their latest defeat, while they are 1.62 to bounce back with victory over Fulham at Craven Cottage next Sunday.