Pep Guardiola: Kevin De Bruyne ‘knows where I am’ if he wants to talk 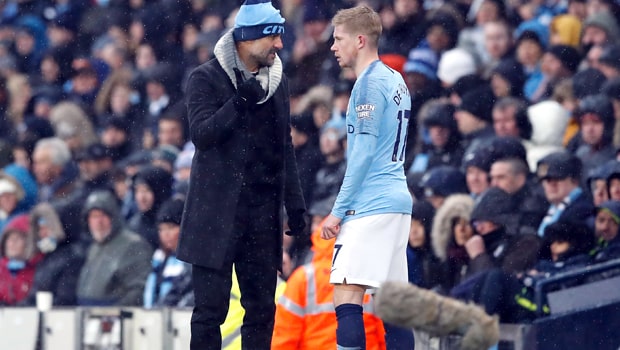 Pep Guardiola says midfielder Kevin De Bruyne ‘knows where I am’ if he has a problem regarding team selections.

Guardiola’s comments came after media reports that De Bruyne was unhappy at being taken off in the 9-0 Carabao Cup win against Burton Albion last week.

The Belgian ace has been plagued by injury at times this season, while his manager has suggested De Bruyne was suffering from ‘exhaustion’ after his run to the World Cup semi-finals in Russia last summer.

“I didn’t speak with him so that one time I cannot say what he thinks because I don’t know,” said Guardiola of the reports about the Burton game.

Having opened the scoring against League One side Burton, De Bruyne was replaced by Phil Foden around the hour-mark, with City cruising to victory.

That was his sixth game back after the second of two significant knee injuries this season, setbacks that have limited him to just 11 appearances for the Premier League champions this term in all competitions.

“If he has a problem, he knows where I am, so I don’t know, really,” Guardiola added ahead of the Monday night meeting with Wolves at the Etihad Stadium.

Having made 52 appearances in all competitions for City and then played a central role in Belgium’s Russia odyssey, Guardiola mad the suggestion that de Bruyne was exhausted in December, something the player publicly denied.

Manchester City are 1.17 to beat Wolves as they look to cut Liverpool’s advantage back to four points. Wolves are 15.00 while the draw is 7.00.