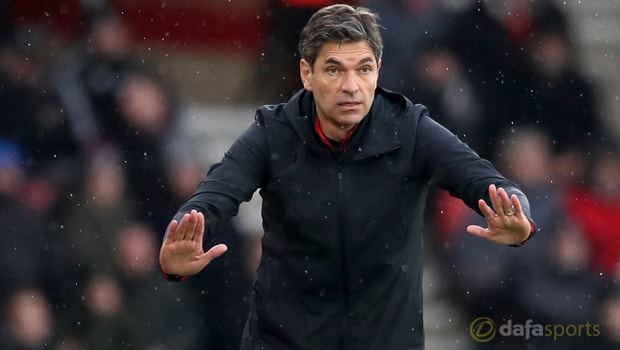 Southampton manager Mauricio Pellegrino has called on his players to aim for a big push over the final weeks of the season.

Saints have got nine games remaining and they currently sit just a point outside the relegation zone following a run of one win from 15 attempts in the Premier League.

They picked up a point at home to relegation rivals Stoke last weekend, though only after surviving some late scares as the Potters threatened to leave St Mary’s with the spoils.

While he feels his side have been playing better since the turn of the year, Pellegrino admits it is points rather than performances which matter from now until May.

“Thinking about the next nine games, every single game will be massive,” said Pellegrino.

“Because we have to try and do our job as soon as possible, and I think we are ready to compete.

“It is difficult now to say to the fans and to the people ‘OK, we are getting better’ because, since January, obviously I think the team lift performance, but now we need to get results – it is reality.”

Next up for Saints is a trip to Newcastle on Saturday, where he’ll come up against his former boss Rafael Benitez.

Newcastle and Southampton currently occupy the two places above the drop zone, ensuring the stakes are high for their St James’ Park showdown.

“We have to be focused on what we have to do on the pitch. How we attack, how we defend, how balanced is our mentality in good moments and difficult moments,” Pellegrino added.

“Obviously I have had a lot of relations with Rafa and I will always be grateful with him, because I have been with him as a player and assistant and also with his staff.”

Southampton are 2.80 to win against Newcastle. The Magpies are 2.70 favourites on home soil, with the draw priced at 3.10.