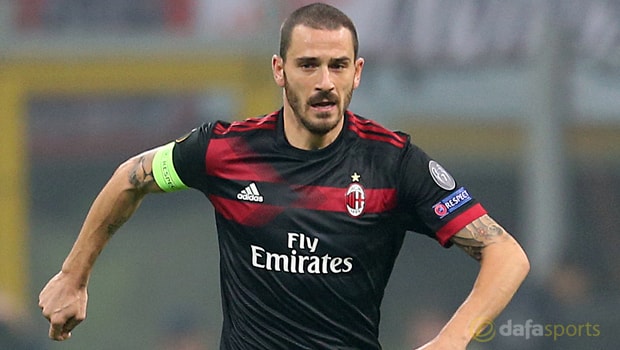 Leonardo Bonucci says AC Milan were “a little scared” after his side were beaten 2-0 by Arsenal on Thursday night but the defender is still holding out hope of qualifying for the Europa League quarter-finals.

Milan welcomed an under-pressure Arsenal side to the San Siro for the first leg of the last-16 clash and the hosts, who were on a 13-game unbeaten run and yet to taste defeat in 2018, were expected to triumph.

However, the Gunners, who had lost four consecutive Premier League games away from home ahead of the contest, produced one of their best performances of the season to run out 2-0 winners.

Armenia international Henrikh Mkhitaryan, who joined from Manchester United in the January transfer window, and Welsh midfielder Aaron Ramsey both netted to give the visitors two valuable away goals and put one foot in the quarter-finals of the competition.

The Rossoneri face a huge challenge to progress to the next round but Bonucci, who joined the Italian outfit from rivals Juventus last summer, says his side must keep the faith ahead of the second leg at the Emirates.

“We did not have the right mentality right from the get-go,” he told Sky Sport Italia.

“We were a little scared since we are so young. Let’s hope we learn from this.

“It is hard but we will have to give it a go [in the second leg]. Anything can happen in football so we have to stay positive.”

Milan return to Serie A action on Sunday away at Genoa and the visitors are narrow 2.50 favourites to pick up all three points, a draw is priced at 3.00 while the hosts are 3.10 outsiders.