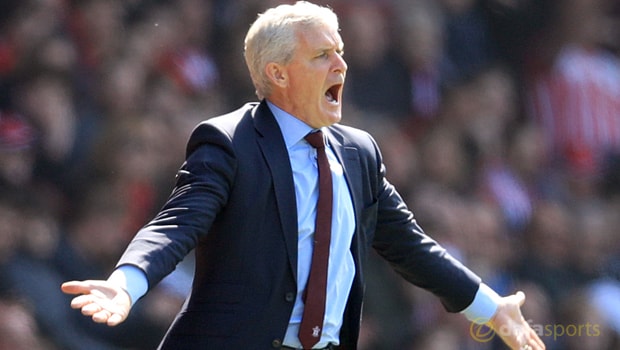 Southampton manager Mark Hughes was unimpressed with referee Mike Dean after the official was deemed to have missed a red card offence from Marcos Alonso in a 3-2 loss to Chelsea.

The Saints led at half-time through a goal from Dusan Tadic and, with Chelsea seemingly struggling, they doubled their advantage on the hour when Jan Bednarek scored on his debut.

Chelsea however mustered a fightback as sub Olivier Giroud netted a brace either side of Eden Hazard’s goal to complete an unlikely turnaround.

Alonso’s cross set up Giroud for the goal that gave Chelsea their lifeline and, according to Hughes, the defender should have been off the field before that.

Alonso escaped without punishment for standing on the back of Southampton forward Shane Long’s calf in the first half.

With the teams set to meet again in an FA Cup semi-final next weekend at Wembley, Hughes has called on the Football Association to take retrospective action, which could potentially rule Alonso out of that game.

“It was a poor challenge, it should have been a red card in my view,” Hughes said.

“I don’t think he was booked, so maybe people need to look at that again, retrospectively. Thankfully he’s just about OK, but he’s been raked down the calf.

“We’re not here to accuse people, and no sour grapes, but a decision needs to be made on that because it’s not acceptable.”

Southampton remain 18th following the loss as they try to avoid slipping into the Championship for the first time since 2011/12. Hughes says they are up for the battle ahead.

“Some of our guys are up for what we’ve got ahead of ourselves,” Hughes said.

“I’m learning about the group more and more each training session and match.

We’re still conceding goals and they’re just slips in concentration.” Saints are 7.50 to win next weekend’s FA Cup semi-final at Wembley. Chelsea are 1.44 while the draw is 4.50.