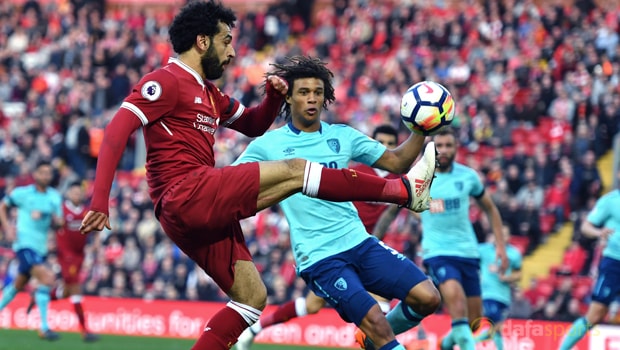 Liverpool manager Jurgen Klopp has suggested that he was always confident Mohamed Salah would succeed in English football without needing to ‘look like a bodybuilder’.

The Anfield boss admits there were some reservations about signing the Egyptian international from Roma due to his stature, but he felt that Salah had the right attributes other than physicality.

Salah notched his 40th goal of the season in all competitions in Saturday’s 3-0 home win over Bournemouth – becoming the first player to achieve that figure for Liverpool since Ian Rush in 1986/87.

Any initial reservations over £34m signing Salah have long since been dispelled, according to the German.

“When you saw him playing in Rome there was this last question around him: if you don’t play in England, you can’t say yes because it is more physical,” said Klopp.

“But there was a moment when we said: ‘Yes, he is kind of smart and he doesn’t need to look like a bodybuilder.'”

Liverpool have now scored 121 goals in all competitions so far this season. Their front three of Salah, Sadio Mane and Roberto Firmino have scored 83 goals already this season, while the Reds have managed 300 goals in 148 games under Klopp.

The manager admits those numbers are very impressive, though he won’t be resting on his laurels just yet.

“What a number. Wow! That’s really good but we have to carry on – there are a few games to come,”
Klopp said.

After reaching the Champions League semi-finals this week, where they will face Roma, Klopp suggested there was a carnival atmosphere around Anfield before the Cherries clash. He was relieved to get three more points and stay on the heels of second-placed Manchester United.

“Today it felt like a parade with people in their cars using the horn – wow. But we have to stay angry,” he added.

“We played Bournemouth, the rest was a few days ago and I said a few times our whole lives is Champions League qualification, so these games are all so important.”

Liverpool are 1.53 to win their semi-final first leg against Roma on April 24, while the Reds are 3.00 to win the Champions League this season.