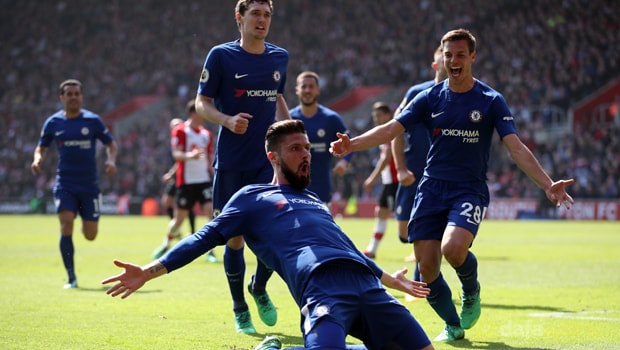 Antonio Conte admitted he was an angry manager as his Chelsea side sat in the dressing room at half-time in Saturday’s clash with Southampton, before praising the ‘fire in their eyes’ players that turned the game around.

Dusan Tadic calmly put the Saints into a half-time lead and things got worse for Chelsea on the hour when Jan Bednarek doubled the lead. Conte immediately rung the changes with Olivier Giroud and Pedro coming off the bench.

The French striker scored a brace either side of Eden Hazard’s goal as Chelsea claimed an unlikely success. Having been livid at the break, Conte paid tribute to those that responded to help turn things around.

“I was very angry from our first half,” Conte said.

“In the second half we showed great character, great determination and desire to win the game. We showed the right fire in our eyes.”

The defending champions have collected just 12 points from the previous 33 available since New Year’s Day. They didn’t even muster a shot on target for 55 minutes at St Mary’s.

Conte was at a loss to explain the lack of desire in the early exchanges from Chelsea, admitting the buck stops with him in that regard. He was however fulsome in his praise for the turnaround.

“The most important thing is to show in every game the right passion and to fight until the end. We need to finish this season in the best possible way,” he added.

“I don’t know why the desire wasn’t there but the coach is the first person to have the fault. It doesn’t matter that we won the game 3-2, it was important to see the right reaction and fight in the eyes of my players.”

Chelsea will face Southampton again next weekend in the FA Cup semi-final at Wembley. The Blues are 1.44 to win that game, with Saints 7.50 and the draw 4.50.