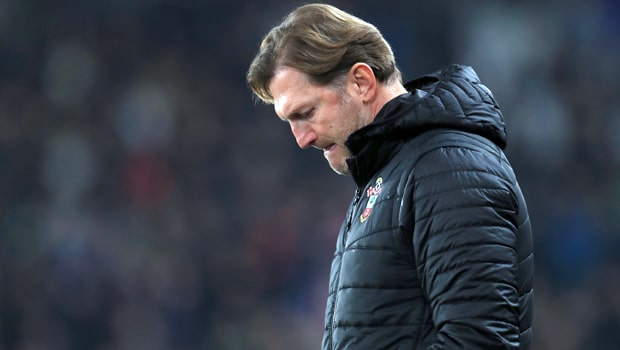 Ralph Hasenhuttl feels Southampton only have themselves to blame after they were knocked out of the FA Cup by Championship outfit Derby on Wednesday.

The third round replay at St Mary’s Stadium came 11 days after the two sides had played out a 2-2 draw at Pride Park.

Southampton had been 2-0 up in that match before Derby fought back to force a replay and it was a case of deja vu on Wednesday, as goals from Stuart Armstrong and Nathan Redmond seemingly put the hosts in control, only for the visitors to battle back and force extra rime courtesy of strikes from Harry Wilson and Martyn Waghorn.

There were no further goals during extra time, but, when Redmond missed from 12 yards in the subsequent penalty shootout, Derby defender Richard Keogh was on hand to score the decisive spot kick and set up a fourth round trip to Accrington Stanley later this month.

Hasenhuttl offered no excuses for the defeat after the match, admitting his side threw away a great opportunity to reach the fourth round, although he also took solace from the fact they can now focus solely on their bid to remain in the Premier League.

“It’s a nightmare I think because we had again a big chance to be in the next round and gave it away,” Hasenhuttl told reporters.

“If you have two times a chance to win and don’t do it then you don’t deserve to be in the next round so congratulations to Derby County.

“We have to concentrate on the Premier League now.”

Southampton currently sit 16th in the top-flight standings, just a point above the bottom three and they are priced at 9.00 to be relegated come the end of the campaign, with a home clash against Everton to come this weekend.