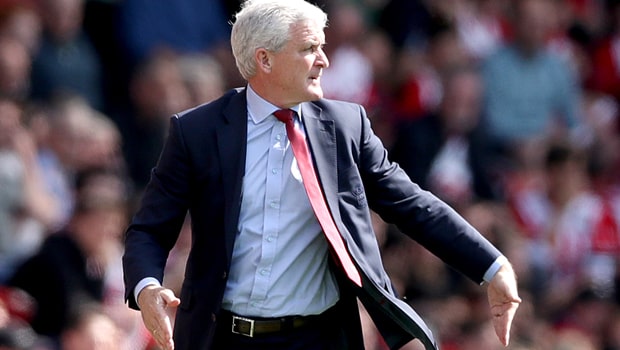 Mark Hughes knows full well that he is at risk of being the next Premier League boss sacked.

Fulham got rid of Slavisa Jokanovic before the international break after winning just one of their first dozen matches back in the top flight.

Former Chelsea and Leicester boss Claudio Ranieri was quickly installed at Craven Cottage and Hughes takes Southampton to face the basement boys on Saturday in the Italian’s first game in charge.

The Saints boss suggests that Fulham may be “boosted” by having Ranieri in the dugout for the first time.

“It could be they needed a change of focus, a little bit of a change of direction. I don’t know the circumstances of it, obviously it is results driven as we all know but clearly they’ve got a group of players that they feel are under-performing,” Hughes said.

“That could be said of the group I have, but I think when you do make a change the positive may be that people get back on board here for a couple of games but it can very quickly disappear if you don’t start getting results.”

His side are just three points and three places above Fulham ahead of their trip to London and Hughes is acutely aware that he could soon come under pressure to keep his own job. However, he cannot allow the noise to distract him from the job at hand.

“I have to take a short term view, I’ve got to look ahead to the next game but for me it’s about a longer term view of trying to move this group of players and this club forward,” he added.

“That’s not going to happen overnight, we had problems last year and were able to get ourselves out of the situation we found ourselves in.

“But there will always be speculation, I call it noise, there’s always some noise when one manager departs and that noise then switches to someone else. Maybe at the moment a little bit of the noise is around me.”