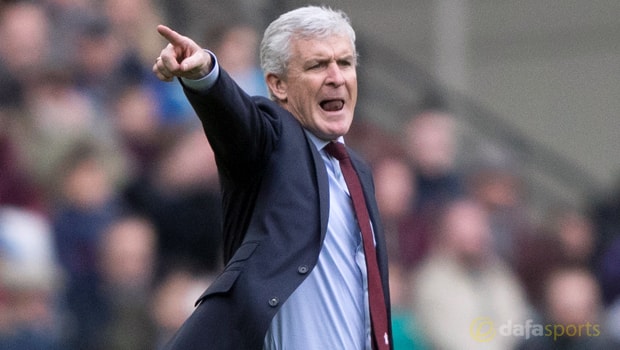 Mark Hughes says Southampton’s confidence remains high and the manager insists his side will give everything they have when Chelsea visit St Mary’s on Saturday.

Hughes has been in charge of the Saints for three games and, after beating Wigan in the FA Cup quarter-final in his first game in charge, back-to-back Premier League defeats have been suffered at the hands of West Ham United and Arsenal.

The south-coast outfit are sitting 18th in the table, three points behind Crystal Palace with six games remaining, and time is running out for the club to turn their fortunes around.

Southampton have won just one of their last 19 league matches – that sole triumph coming against West Brom at the start of February – and they haven’t won at home in the league in their last eight outings.

Hughes will be taking charge of his first match at St Mary’s on Saturday and the Welshman faces a tough test to get anything from soon-to-be dethroned champions Chelsea, who still have aspirations of a top-four finish.

Despite the dreadful run of form, the former Stoke City boss is feeling optimistic heading into the weekend and believes his side can pull off a surprise win.

“Confidence hasn’t been diminished in any way, shape or form,” Hughes told reporters.

“We’re ready to go. We’ve had another good week and we’ll get the benefit of that.

“It’s a busy week and one that will test us, but we’re all ready for it and ready for the challenge.”

Southampton are 4.33 outsiders to clinch all three points, a draw is priced at 3.60 whilst the Blues, who are reportedly ready to part ways with Antonio Conte this summer, are 1.85 favourites.