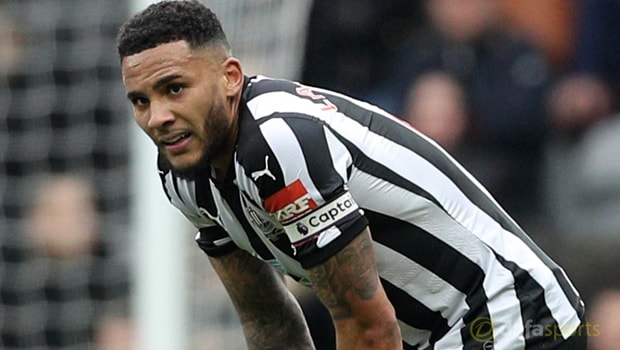 Newcastle United manager Rafael Benitez says captain Jamaal Lascelles is happy at the club and is focused on improving his game amid reported interest from Chelsea.

Former England Under-21 international Lascelles has been a standout player for the Magpies this season and his impressive performances at the back have helped the club to within touching distance of top-flight safety.

Newcastle suffered when their captain spent a short spell on the sidelines with an injury midway through the campaign but, on his return, the results improved and his importance to the team was further highlighted.

The 24-year-old defender missed out on a place in England’s last squad for the friendlies against the Netherlands and Italy but, if he continues to impress for the rest of the season, many believe he should be on the plane to Russia for the World Cup this summer.

Recent reports have linked Chelsea, who are set for a squad overhaul in the upcoming transfer window, with an interest in the centre-back whilst several other top teams across Europe are keeping tabs on his situation.

However, Benitez, who is hoping for financial backing this summer, has cooled speculation suggesting his captain could leave and insists Lascelles is happy with life in the north east right now.

“You can’t stop speculation about players but I was talking with him for a while last week, the focus is just trying to improve his game.

“I think at the moment he knows he has to continue progressing and learning but he is quite happy here.”

Lascelles will be in action on Sunday when Newcastle welcome Arsenal to St James’ Park and the hosts are 3.30 to claim all the spoils, a draw is priced at 3.50 whilst the Gunners are 2.20 favourites.