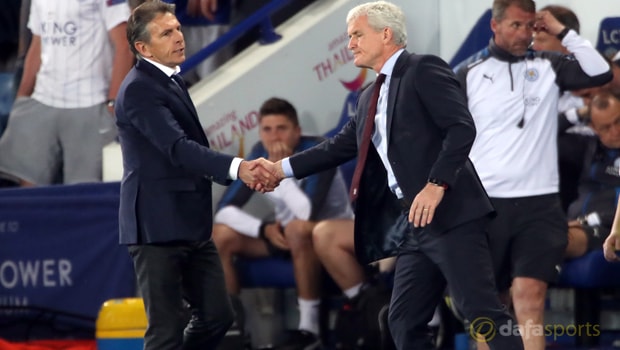 Southampton will need to take risks in their remaining Premier League games if they are to retain their place in the top-flight, according to Mark Hughes.

Hughes is yet to pick up a win in the league since replacing Mauricio Pellegrino in March, having overseen three defeats and one draw, and Southampton, who are priced at 1.36 to be relegated, are in serious danger of dropping out of the top-flight.

After conceding three goals in each of his first three Premier League games at the helm he finally saw his side keep a clean sheet on Thursday in the goalless draw at Leicester.

Hughes said: “We will have to wait until the rest of the season to see if that’s a significant point one way or the other.

“But given the fact we haven’t been able to pick up any points in recent weeks, clearly it is a positive and we must take it as a positive.

Southampton still have to face Bournemouth, Everton, Swansea and Manchester City and Hughes admits they may have to throw caution to the wind.

He added: “The importance of taking something out of the game shouldn’t be underestimated, I don’t think. But we are going to get to a point where we are just going to have to throw everything at it.

“Maybe tonight wasn’t the game for that but certainly that is going to be in my mindset that we are going to have to get maximum points.

We are going to have to take more risks in the games coming up and that’s where we find ourselves, unfortunately.”