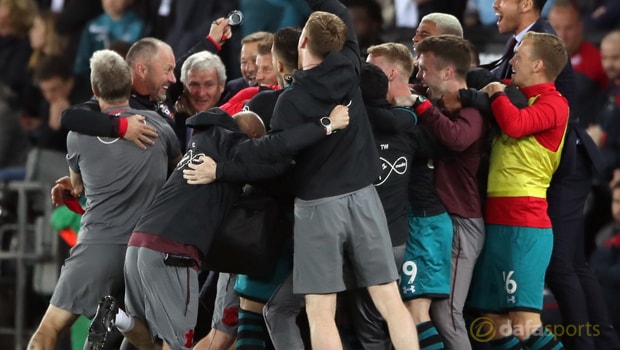 Southampton took a giant step towards Premier League survival by beating Swansea 1-0 at the Liberty Stadium on Tuesday and boss Mark Hughes has labelled their performance as “immense”.

The Saints went into the match above both the Swans and the relegation zone on goal difference, but Manolo Gabbiadini’s winning strike with 17 minutes remaining means, barring a mathematical miracle, the South Coast club will be playing top-flight football next season.

Hughes, who was tasked with saving the club from relegation when he succeeded Mauricio Pellegrino as boss in March, was quick to praise his players after the match, not just for their efforts on Tuesday, but for the way they have performed throughout his short time at St Mary’s Stadium.

“It was a huge effort by everybody, not just this evening, but ever since we took on the challenge,” the Welshman told Sky Sports.

“Myself and the staff came in, and found a group of guys that just needed a bit more direction and belief in what they were doing.

“I have to say, to a man, they’ve worked their socks off, every single day, every single game. Some games we’ve had things go against us and have had to pick ourselves up, but I thought we were immense today, we weren’t going to be denied.”

Hughes refused to fully admit that survival has been achieved, with the Saints still needing one more point when they host champions Manchester City on the final day to be completely assured of safety.

He added: “I’m really delighted for them, and the club, and clearly relegation from the Premier League is a huge negative for any club. It’s not done mathematically but we’ve put ourselves in a good position.”

Southampton are now priced at 151.00 to be relegated come the end of the season, while the defeat for Swansea means they are available at 1.30 to go down.