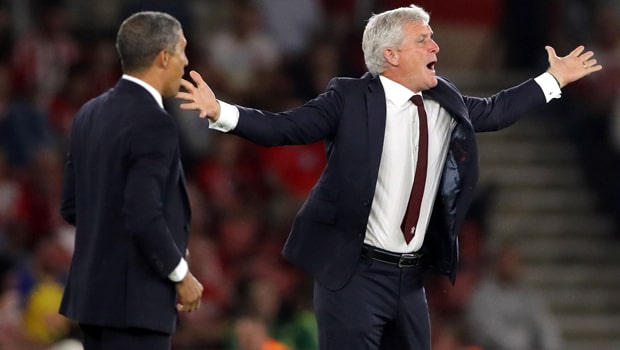 Mark Hughes felt the stoppage time penalty that cost Southampton victory over Brighton at St Mary’s was of the ‘soft’ variety.

Glenn Murray converted from 12 yards to ensure the Seagulls earned a 2-2 come-from-behind point in the south-coast clash.

Pierre Hojbjerg’s long-range strike and a penalty from Danny Ings looked to have put Saints on course for successive Premier League wins for the first time since April 2017, but Shane Duffy quickly responded to Ings’ spot-kick to give Brighton hope.

Ireland international Duffy then collided with James Ward-Prowse in the penalty box from a late corner, with Hughes adamant that his man had done nothing wrong.

“He’s a big boy, the big centre-half, and has gone down a little bit easy and the referee’s decided that warranted a penalty decision at that late stage,” he said of Duffy.

“That was a shame. “We go zonal (marking). He (Ward-Prowse) is there as a blocker, you have to block.

“It was a very soft penalty and unfortunate but sometimes referees go with what they see in the split second.”

Saints have managed just four wins in their last 27 Premier League games at St Mary’s and, while frustrated by the penalty decision, Hughes conceded that they simply should have had the game in safe keeping by that late stage.

“You just have periods in games where momentum goes against you,” he added.

“You have to ride out those moments and hope you don’t concede.

“We’re disappointed because we should have been home and hosed long before the 92nd minute, or whenever it was when they got the penalty award.”

Southampton are 15.00 to win at Liverpool on Saturday. The Reds are 1.22 to make it six successive wins in the league this term, while the draw is 6.00 for the Anfield clash.