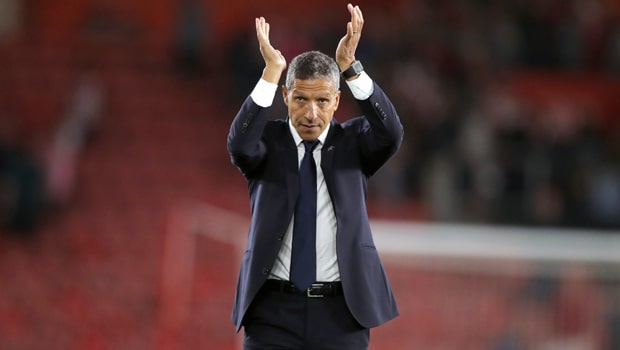 Chris Hughton felt his players had taken responsibility for this own performances as they hit back from two goals down to draw with Southampton at St Mary’s.

Brighton were staring at defeat on the south coast clash when Danny Ings’ penalty midway through the second half added to Pierre Hojbjerg’s long-range strike before the interval.

Shane Duffy quickly reduced the arrears to give Brighton hope and, having thrown caution to the wind, the visiting side were given a chance to steal a point in stoppage time when central defender Duffy went down under a challenge from James Ward-Prowse in the box and referee Anthony Taylor pointed to the penalty spot.

Glenn Murray made no mistake with the resulting kick, ensuring Brighton had matched their feat of coming from two down at take a draw with Fulham earlier in the month.

While there were plenty of aspects to their play that left Hughton underwhelmed in the first half, the manager acknowledged that his men had responded well.

“If our performance second half was the same as the first half, then I think we’re struggling,” said Hughton.

“But we certainly upped the intensity of the game, pressed better, and broke really well.

“I was confident we would create chances. Once we got one back, if someone was going to score, I felt it was going to be us.

“I can say what I need to say, and shout as much as I want, but you’ve got to have a group of players who realise it themselves.

“There wasn’t a player coming in at half-time who didn’t realise the team had under-performed. And you can’t do it in this division and get away with it.

“Credit to them, they upped their game.” Brighton are 4.75 to win at home to Spurs on Saturday. Tottenham, after back-to-back league defeats, are 1.75 with the draw priced at 3.75.