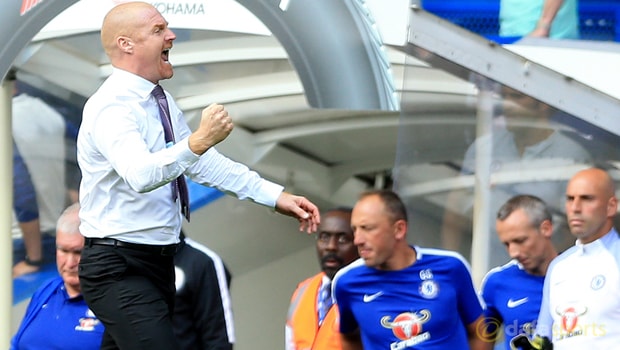 Burnley manager Sean Dyche was full of praise for his troops as they secured a shock 3-2 away win at Chelsea on Saturday.

The Clarets, 2.38 to be relegated this season, were expected to lose on the first day of the new Premier League season.

However, Gary Cahill’s sending off gave them a chance and they took it with both hands in West London.

Striker Sam Vokes scored either side of a sublime effort from Stephen Ward and Burnley led 3-0 at half-time.

Goals from Alvaro Morata and David Luiz made for a tense finale but ultimately were not enough for the Blues as Chelsea also had Cesc Fabregas sent off at Stamford Bridge.

Saturday’s win gives Burnley the perfect start ahead of their upcoming games against West Brom, Tottenham, Crystal Palace and Liverpool, and Dyche was left delighted.

He told the club’s official website: “It was a fine day overall, for many different reasons. “I thought we were strong early in the game, while it was 11 v 11.

The sending off made a difference and I thought we did really, really well to handle that and keep the ball and create chances.

“We scored three good goals and I think when you are talking about who you are playing against and where you are playing, that’s up there as one of the best 45 minutes of my time here.

“The shape and organisation was great. The second half became a different game, but they had to do something.

A lot was made of our away form last season, and don’t get me wrong, that doesn’t correct it. But it’s a great start.”