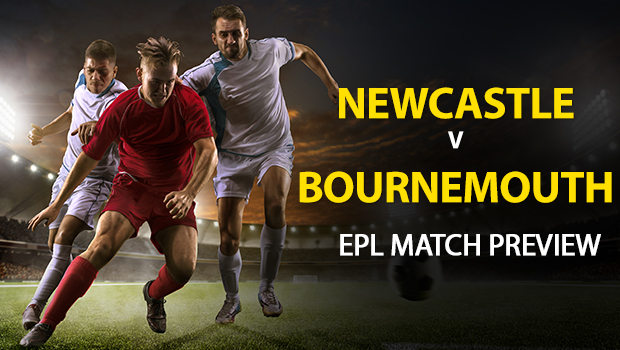 Newcastle gets set to host AFC Bournemouth at St. James’ Park this weekend as they look to build on last weekend’s 1-0 win over Watford. Bournemouth are coming off a tough 2-1 loss to Manchester United.

Betting on the Draw: Odds — at 3.39 — indicate there’s a 29.5 percent chance the match ends in a draw. There’s a draw in 31 percent of AccuScore sims, suggesting some added value on the draw — but not much.

Staying Positive: Man U ended a six-game unbeaten streak for Bournemouth last weekend, but the team still looks to be in good spirt. Defender Simon Francis made that clear this week, “I thought we showed all the capabilities and attributes to do that but it just wasn’t to be. It was hard to take but I am sure we will take lots of positives going into the Newcastle game.”

Head-to-Head: These two sides last met in Premier League action in February of 2018, resulting in a 2-2 draw. Newcastle was up 2-0 at halftime.

Callum Wilson has a 23 percent chance to score for Bournemouth. He averages 1.41 shots overall per sim, 0.54 shots on goal per, and 0.26 goals per sim.

Salomón Rondón has a 23 percent chance to score for Newcastle, just a shade higher than Wilson’s chances for Bournemouth. Rondón averages 1.76 shots overall per sim, 0.72 shots on goal per, and 0.26 goals per sim.

Odds — at 2.84 — indicate there’s a 35 percent chance Newcastle win this game. They win close to 42 percent of AccuScore sims, suggesting some added side value on the pick. Newcastle winning is a four-star (out of four) AccuScore hot trend pick.