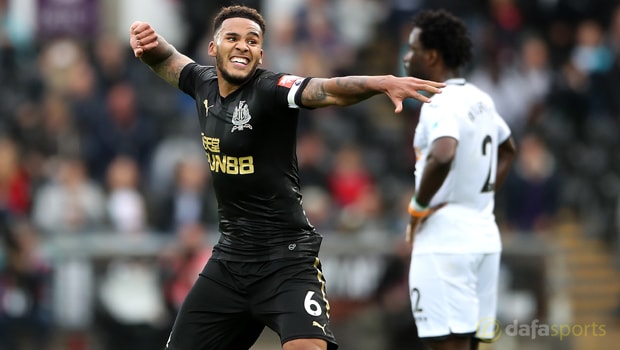 Newcastle United have reportedly started negotiations with captain Jamaal Lascelles about extending his contract following his impressive start to the Premier League season.

Lascelles, who was handed the armband at the beginning of the previous campaign, led Newcastle to the Championship title and an instant return to England’s top flight.

The 23-year-old joined the Magpies in 2014 from Nottingham Forest and he has established himself as a key first-team member over the past season, receiving rave reviews for his performances.

He continued his good form on Sunday by scoring the only goal in the 1-0 victory against Swansea City at the Liberty Stadium, thumping home a powerful header from six yards.

It was Newcastle’s second consecutive victory, and clean sheet, and there are even rumours suggesting the former England Under-21 international is being watched closely by Gareth Southgate.

The centre-back is yet to earn a senior cap for the national team but he is liked by the current Three Lions boss, who handed the Derby-born star his last international appearance.

Interest in Lascelles may grow as the season goes on and that is why the north east outfit have reportedly entered discussions about extending current contract, which runs out in 2020.

Newcastle are back in action on Saturday when they welcome Stoke City to St James’ Park and the hosts are 2.38 favourites, a draw is priced at 3.20 whilst the visitors are narrow 3.25 outsiders.

Rafael Benitez is expected to be back in the dug-out for the clash, having missed the Swansea trip, and he will have to decide whether to recall Jonjo Shelvey, who was an unused substitute against his former employers, to the starting line-up.