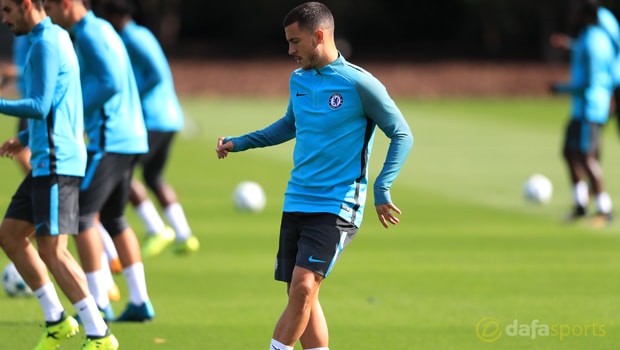 Eden Hazard has revealed his big ambition is to win the Champions League with Chelsea and he hopes this feat can be achieved in this season’s competition.

Hazard, who arrived at Stamford Bridge in 2012 from Lille, has won two Premier League titles, the League Cup and the Europa League since joining the club for a reported £32million.

But, despite the silverware, the Belgium international, who recently recovered from ankle surgery, is yet to lift the Champions League trophy in his career and he wants this to change in this campaign.

The closest the 26-year-old has come to winning Europe’s elite tournament was when the Blues reached the semi-final in 2014, where they lost 3-1 on aggregate to Spanish outfit Atletico Madrid.

Chelsea are on a good run of form at the moment, having racked up three consecutive league wins, and the confidence is high going into the first Group C clash against Qarabag on Tuesday night.

Hazard, who is hoping to play some part in the match, is desperate to taste success in the competition and will do everything he can to help the Blues go all the way.

“Yeah, this year (to win it) is important… I have only got to the semi-final when we lost to Atletico Madrid. So it’s in my head to win this trophy,” he said.

“I have won the Premier League and the title in France. Now all the big players want to win the Champions League.”

Chelsea are firm favourites to 1.10 to beat Qarabag, a draw is priced at 8.50 whilst the Azerbaijan opponents are massive outsiders at 29.00 to cause a huge upset.