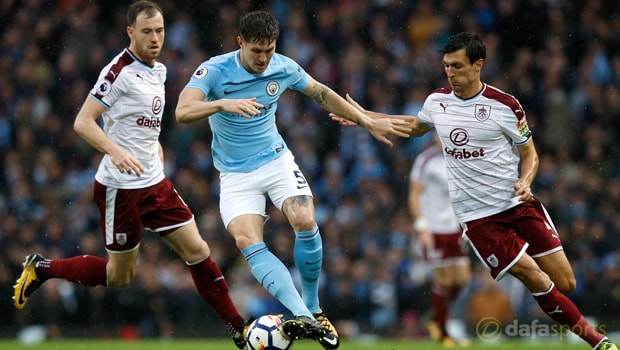 City have been in sensational form this season and they went into the clash against the Clarets, who had only been beaten once in the Premier League prior to the Etihad meeting, on the back of a third straight Champions League victory in midweek.

The Citizens put on another impressive showing in front of a raucous home crowd with Sergio Aguero, who equalled the club’s all-time goalscoring record, Nicolas Otamendi and Leroy Sane all getting on the scoresheet.

Pep Guardiola’s side have now opened up a five-point lead at the top of the table, scored 42 goals in 13 games in all competitions this season and won their last 11 matches in succession – matching a club record.

Everything is clicking with City at the moment with the likes of Kevin De Bruyne, David Silva, Raheem Sterling and Gabriel Jesus also getting in on the action in recent weeks.

It looks like it will take a big effort to overhaul the blue side of Manchester this term, on both the domestic and European stage, and Stones has praised the form of the attacking-minded players.

“The strikers are on form now. The competition in training is making them want to be better and score more goals,” he said.

“When they are on the pitch they have got to take their chances and that is what they are doing.

City are next in action on Thursday when they play host to Wolverhampton Wanderers in the League Cup fourth round and the home side are firm 1.13 favourites to win, a draw is priced at 10.00 whilst the visitors are massive 17.00 outsiders.