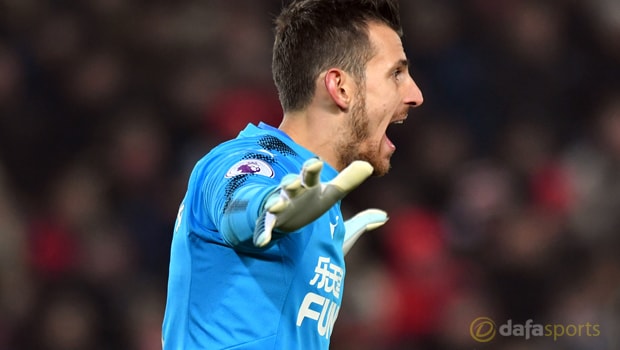 Martin Dubravka wants to sign for Newcastle on a permanent basis during the summer, but for the time
being his focus remains on helping the club preserve their Premier League status.

The Slovakia international goalkeeper joined the Magpies on loan from Sparta Prague during the January transfer window and he made a memorable start to his career in English football, as he kept a clean sheet during the 1-0 victory over Manchester United.

The 29-year-old has also kept clean sheets in back-to-back games against Southampton and Huddersfield over recent weeks and Newcastle may well be tempted to sign him on a permanent basis.

The Magpies reportedly have an option to buy Dubravka for £4.2million during the summer, but they may have to act quickly, as Italian club Udinese are believed to be monitoring his situation on Tyneside.

Dubravka himself certainly seems keen to join Newcastle on a permanent basis, although he does not believe now is the right time to discuss his future, with the club’s top-flight status not yet being assured.

“You need to stay focused until the last game,” Dubravka said.

“I don’t like to say we have one or two more games to stay in the league and be safe. Everybody knows that we are not in the best situation and need to fight for it.

“I want to stay here after the summer, so I need to be focused, but I don’t think this is the time to speak about it.”

Dubravka has established himself as Newcastle’s number one since making his debut for the club and he is expected to be between the sticks once again when Rafael Benitez’ side travel to Leicester in the Premier League on Saturday.

Newcastle are priced at 4.00 to emerge from the King Power Stadium with all three points, while Leicester are available at 1.95 and the draw is on offer at 3.50.