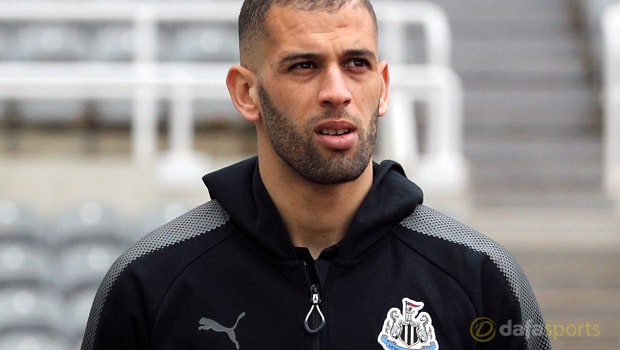 Islam Slimani’s hopes of securing a permanent switch to Newcastle United have taken a massive blow after the striker was handed a three-match suspension for an incident in the 1-0 defeat to West Brom last Saturday.

Algeria international Slimani joined the Magpies on loan from Leicester for the rest of the season in January but has failed to make a real impact during his time in the north east.

The 29-year-old striker arrived at St James’ Park injured, having picked up a groin problem with the Foxes, and he didn’t make his debut until the 1-0 home win over Huddersfield Town on March 31.

Since that match, the Algiers-born star has only made three more appearances and his latest outing, which came in the 1-0 loss to the Baggies, has seen him slapped with a three-game ban.

The former Sporting striker was found guilty of kicking out at opposing defender Craig Dawson and, with Newcastle having just three games remaining, his chances of staying on Tyneside are slim.

Manager Rafael Benitez, who is still seeking assurances over a summer budget before signing a new deal, is said to be disappointed with the lack of impact Slimani has had on the team.

Englishman Dwight Gayle is now expected to start the final three games of the campaign, beginning with Saturday’s trip to Vicarage Road to take on an out-of-sorts Watford side.

The Hornets, who suffered an 11th away defeat from their last 12 at Tottenham last time out, are 2.40 favourites to pick up all three points, a draw is priced at 3.20 whilst the visitors are a 3.00 chance.

Newcastle are aiming to end a run of back-to-back 1-0 defeats whilst they are also looking for just their fifth away league win of the season.