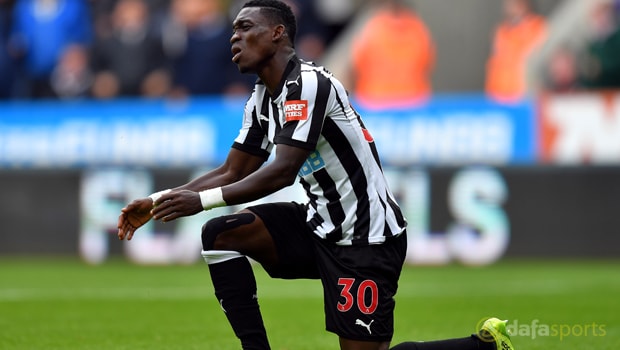 Christian Atsu says he is enjoying life at Newcastle United and is hoping to continue his good start to the season at home to Crystal Palace on Saturday.

Atsu spent a season on loan at St James’ Park in the 2016/17 campaign, helping the club earn an instant return to the Premier League, before making the permanent move in the recent summer transfer window.

The Ghana international has been a regular first-team fixture for the Magpies this term, featuring in all eight league matches and he scored in the 2-1 victory over Stoke City in September.

It is a strange time in the North East at the moment after owner Mike Ashley, not for the first time in his 10-year tenure, revealed the club is up for sale and he wants a deal done before Christmas.

The prospect of new ownership, and potentially more money to spend, is exciting supporters but Atsu insists the main focus for the players is on getting three points at home to Palace on Saturday.

Roy Hodgson’s men are bottom of the table although they arrive at St James’ Park on the back of a brilliant 2-1 win over defending champions Chelsea last weekend.

Atsu is confident ahead of the match and he believes Newcastle can build on the 2-2 draw they recorded against Southampton at St Mary’s last time out. “We will keep fighting and try to attack teams.

We have Crystal Palace at home in front of our fans. We’re confident,” he said.

“I’m very happy playing for Newcastle. I want to improve each and every game. I want to score and to assist more.”

Newcastle are 1.95 favourites to clinch all three points, a draw is priced at 3.50, while the Eagles are 3.80 outsiders.