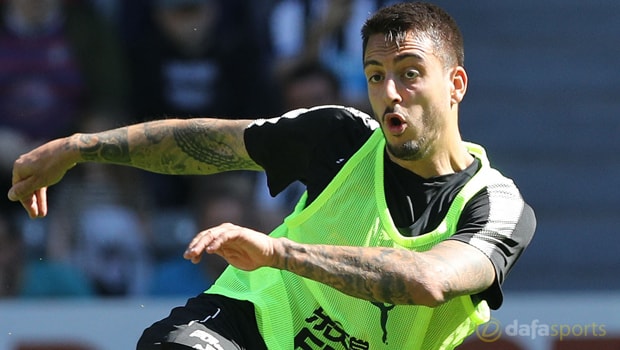 Newcastle United’s summer signing Joselu says the relatively paltry £5m the club paid to recruit him should not diminish expectations of what he can bring to St James’ Park.

Rafael Benitez signed the 27-year-old from Stoke City but, given some of the transfer fees in England and abroad this summer, Newcastle supporters were left feeling a bit underwhelmed.

Joselu had managed just four goals in 22 Premier League appearances after a £5.75m move from Hannover to Stoke in 2015. He spent last season on loan at Deportivo La Coruna.

The striker has quickly started to win over the Newcastle supporters, scoring in the home win over West Ham before the international break and once more impressing in last weekend’s 1-0 win away at Swansea.

He’s likely to start when his old club Stoke come to the north east on Saturday and the German forward is keen to build on his fast start.

He says people should not pay too much attention to transfer fees.

“Newcastle bought me, and now I am trying to play well and trying to help the club win games,” said Joselu.

“I’m just hoping for an opportunity now. I think I have played well, and I am trying to work hard every week to make sure I can be on the pitch and try to score goals to help the club.”

Newcastle boss Benitez has been aware of Joselu since he came through the youth ranks at Celta Vigo and Real Madrid and the striker says he thrives on knowing his new manager has faith in his ability.

“Rafa is a big manager in the world of football,” he added.

“When he talks about you and says he has followed you, it’s nice to know. I am very happy to be working with him.”

Newcastle are 2.38 to beat Stoke on Saturday. The Potters are 3.20 while the draw is 3.25. Joselu is 6.00 to net the opening goal against his former employers.