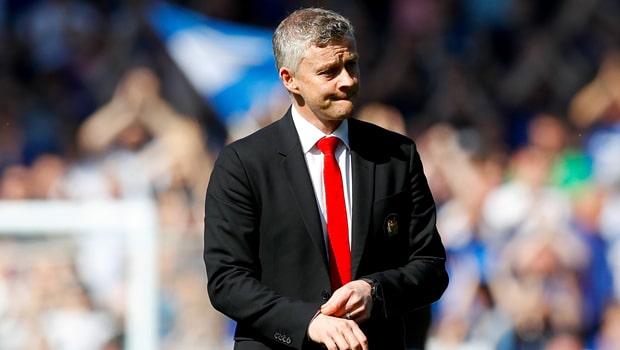 Ole Gunnar Solskjaer apologised to Manchester United fans in the wake of a 4-0 trouncing at Everton on Sunday.

United have lost six of their past eight games in all competitions, while the loss on Merseyside was a fifth successive away defeat – the first time since 1981 that has happened.

Richarlison put the home side ahead before the quarter-hour while Man of the Match Gylfi Sigurdsson doubled the lead by half-time as Everton swarmed all over their visitors.

Two goals in eight minutes around the hour-mark from Lucas Digne and Theo Walcott left United in a hole they were never going to come out of.

Paul Pogba was ineffective in midfield while ex-Everton frontman Romelu Lukaku endured a torrid afternoon up top on his old stomping ground – much to the joy of the Toffees fans.

Solskjaer said the only aspect in which United could claim to have matched Everton was on the terraces.

“We were beaten on all aspects today. The only place we beat Everton – I can’t say we beat them – but we had a fantastic support and I just want to apologise for the performance we turned out,” he said.

“We have been fantastic for long periods and it’s a tough league to get into the top four, never mind winning the league. There are six teams there and Everton want to be in there.

“We know it’s a big task and work to be done. We have to do it together; we have to get on with it because this is not good enough.”

Champions Manchester City come to Old Trafford on Wednesday evening and the United boss says his players must face the challenge head on.

“You have got to start somewhere and we will give it everything we have got with the last four games – massive games with City and Chelsea coming to Old Trafford. That’s where we get the best support in the world,” Solskjaer added.

“We can turn it around. In football, like in life, things can change quickly. We have got to change it from bad to good.”

Manchester United are 7.00 to win the Manchester derby, with City favourites at 1.40 and the draw trading at 4.75.