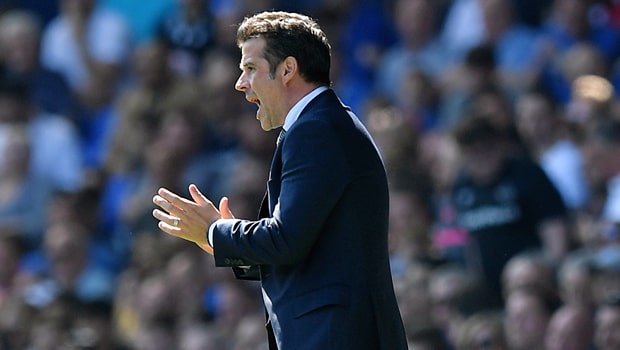 Marco Silva hailed the improved quality on show from his Everton side of late after watching them dismantle Manchester United 4-0 at Goodison Park.

The Toffees backed up recent wins over Chelsea and Arsenal by taking a third top-six scalp on their own patch, barely giving their visitors a moment’s peace throughout.

Richarlison put the home side ahead before the quarter-hour while Man of the Match Gylfi Sigurdsson doubled the lead by half-time.

Lucas Digne fired in quality third goal and Theo Walcott made it four on 64 minutes, as Everton enjoyed the afternoon sunshine in a Merseyside mauling. Victory hoisted Everton into seventh spot, with a Europa League place still very much on the cards.

“I’m delighted with the players. It’s important to remind you what we did in the last four home games – we’re on a fantastic run,” Silva said.

“Our last performance away was not good enough and we must show something different. We did. We were the best team on the pitch from the first to last minute.”

Everton were on top of their opponents from the first whistle to the last, impressing equally with their pressing game and the quality and incision of their movement. For Silva, seeing the home supporter’s joy at the brand of football way satisfying.

“When we won against Chelsea we were 26 games without a win against the top six. After we won I said we will change that, and now we are playing with quality at home,” he added.

“It’s important to see our fans enjoying what we are doing – everything what I want as a manager. We are doing really well. Last seven games, five clean sheets.”

Everton are 2.75 to gain another three points by defeating Crystal Palace at Selhurst Park on Saturday.