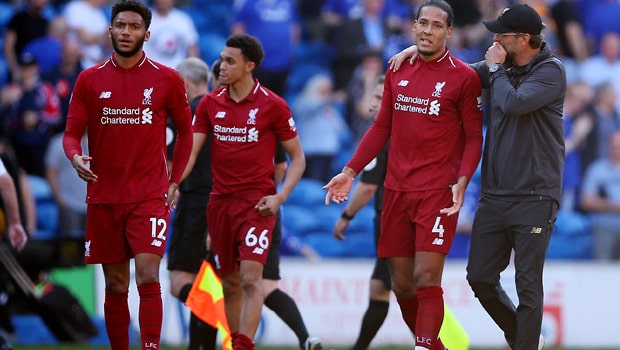 Second-half goals from Georginio Wijnaldum and a James Milner penalty ensured Liverpool ended the weekend where they started, top of the Premier League pile by two points from Manchester City.

The champions had moved into pole position on Saturday with a narrow home success against Tottenham but, despite a tough opening half in South Wales, Liverpool reclaimed top position.

The Reds will be hoping that City come unstuck in the Manchester derby at Old Trafford on Wednesday but for now Klopp was simply pleased to get three valuable points on the board.

“It was prepared to be a proper banana skin and we knew that. The boys were unbelievable. It was clear it was going to be difficult for all of us,” said the Reds boss.

“The weather changed and made it much more intense. We knew we had to stay patient and do the right things. It was very dry on the pitch, so passing was not very easy.

“The boys didn’t get frustrated. We had wonderful chances in the first half but we knew if we continued, we would have chances. It was brilliant how we scored the goals.”

Liverpool face Huddersfield on Friday, determined to win their final three games and pile the pressure on Pep Guardiola’s team.

Liverpool have now won nine consecutive matches in all competitions, their longest winning streak since April 2014 under Brendan Rodgers.

The Anfield side are 2.20 to end their 29-year wait for a top-flight title, with Man City remaining favourites at 1.62.