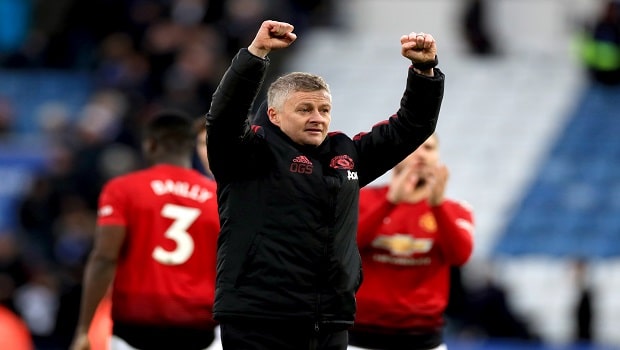 Ole Gunnar Solskjaer felt his Manchester United had been a long way shy of their best in the 1-0 over Leicester on Sunday, though he complemented their sold defensive work.

Marcus Rashford scored the only goal at King Power Stadium inside the opening 10 minutes as the Red Devils made a bright and threatening start. That really was to be as good as it got for the visitors, as Leicester worked their way into the game strongly the longer it went on.

David de Gea was on hand to make a vital saves in denying Jamie Vardy and Rachid Ghezzal and the Spaniard, alongside central defenders Eric Bailly and Victor Lindelof, won the praise of their boss for protecting United’s advantage.

“We didn’t play particularly well, we could have slowed it down in the second half but we defended well. Eric and Victor were fantastic, and David de Gea,” Solskjaer said.

“We put our bodies on the line, there were a couple of bruised noses, knees and dead legs but we fought for the three points.” Under the watch of the Norwegian, United have gathered 22 points from 24 on offer.

They are now within two points of Chelsea in fourth place after a big turnaround since Jose Mourinho was sacked in December.

It wasn’t a perfect performance but with Leicester having beaten Manchester City and Chelsea and drawn with Liverpool of late, Solskjaer was more than willing to take it.

“A clean sheet is always a foundation to build on and will give the lads confidence. They’re not 100 per-cent happy with the performance, because we know we can do better,” he added.

“It’s a hard place to come, the first goal is vital against a team like this and I thought we started brilliantly.”

Manchester United are now 2.40 to gain a top-four finish this season.