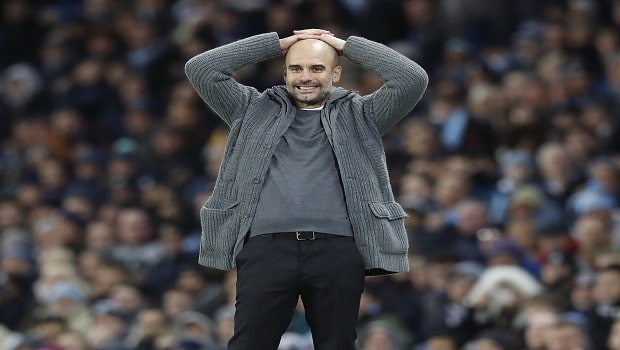 Manchester City manager Pep Guardiola says his side must take the title race with Liverpool ‘game by game’.

The Citizens’ grip on the Premier League trophy is under serious threat from Jurgen Klopp’s outfit.

A 2-1 defeat to Newcastle last Wednesday appeared to hand even more impetus to the Reds, though they couldn’t take full advantage as they were held 1-1 by Leicester City at Anfield 24 hours later. Guardiola admits that, mentally, he was resigned to being seven points behind Liverpool after losing to Newcastle.

Now, after defeating Arsenal 3-1 at the Etihad on Sunday with a Sergio Aguero hat-trick, City find themselves within two points of the leaders again. Liverpool head for West Ham on Monday evening and the last few days have shown Guardiola that each game carries its own significance now.

“I understand pressure, pressure to win the games. After the game in Newcastle, Liverpool were seven points ahead and now they are two,” said the City boss. “Of course they have to play, they have quality, but West Ham are a good side.

“Now we have to start [working] again and think about Everton and after Chelsea. It is a tough week for us and we go game by game.” Aguero’s 10th Premier League hat-trick left him within one of all-time record holder Alan Shearer.

He isn’t too concerned with the record but more focused on getting three vital points after a slip-up last time out. Aguero also admitted there was a hint of handball when he slid in to convert Raheem Sterling’s low cross just after the hour to complete his treble.

“Honestly, I thought it came off the chest but now I saw on the TV it was a handball, maybe,” he said. “It’s good to have 10 hat-tricks. But it’s [more] important to win, even though I’m happy to score.

It’s important to score early because the other day, I scored after 25 seconds and we lost, but I’m very happy today.”

Manchester City are 2.25 to retain their Premier League crown, with Liverpool still favourites at 1.73.