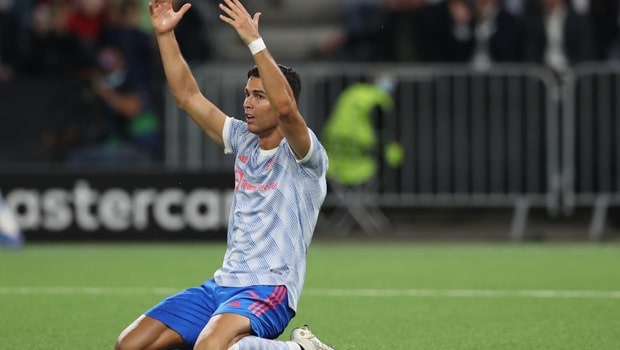 Cristiano Ronaldo scored his third goal in two games on his return to Manchester United as he opened the scoring for the Red Devils in their opening game for the 2021/2022 UEFA Champions League campaign against Young Boys which ended 2-1 in favour of the Swiss.

The match played in Bern on Tuesday saw Ronaldo start his second consecutive game after his 2nd Premier League debut at the weekend against Newcastle United where be scored a brace.

However, Manchester United’s game was thrown off balance when Aaron Wan Bissaka was red-carded in the 35th minute of the game.

However, Cameroonian midfielder Nicolas Moumi Ngamaleu restored parity for the Swiss side in the 66th minute.

Young Boys then won the game late in stoppage time when substitute American forward Jordan Siebatcheu nicked the winner to put Young Boys at the top of the group.

Manchester United will face West Ham in the Premier League at the weekend before a Carabao Cup fixture with the same side next midweek followed by another Premier League game against Aston Villa.

The Red Devils will then Villarreal on the 29th of September for their next UEFA Champions League game. Both side had faced each other in the UEFA Europa League final last season with the Spaniards lifting the trophy.

While Chelsea faced Zenith on Tuesday evening at the Stamford Bridge, and won by a lone goal, courtesy of Romelu Lukaku. Manchester City will face RB Leipzig on Wednesday, while Liverpool will face AC Milan.