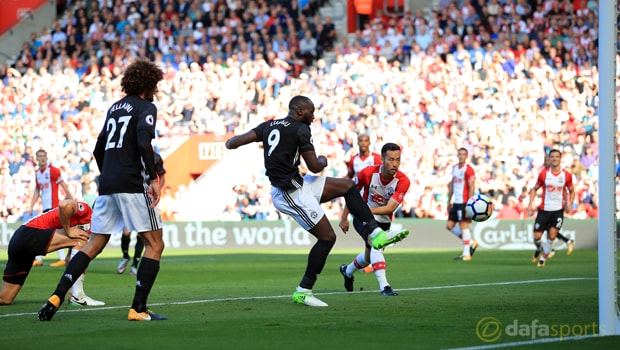 Jose Mourinho says he is surprised by the amount of goals Romelu Lukaku is scoring for Manchester United.

The Belgian forward hit his eighth of the season in Saturday’s 1-0 win over Southampton at St Mary’s.

Mourinho worked with Lukaku before at Chelsea, allowing the powerful frontman to leave Stamford Bridge to join Everton.

This summer however the Man United boss grabbed Lukaku from under Chelsea’s nose to bring him to Old Trafford in a deal worth £75m.

The 24-year-old has made a superb start to his Old Trafford career and, after his latest match-winning goal, Mourinho revealed he wasn’t expecting the goals to flow quite so easily.

“I knew he would score goals, more for us than he did for Everton or West Brom, that is logical, but I was not expecting him match after match to put the ball in the net,” said the Man United boss.

“He is a striker that is scoring goals, but his work is so important for us and he worked hard like everybody else.”

Victory over Saints meant his side kept pace with Manchester City at the top of the Premier League.

They were not at their best, but Mourinho was pleased that his players showed the ability to dig in and protect their lead.

“It is not always possible for high quality, but we fought hard.

We did for 25 minutes what many teams do for 90 minutes – to have five at the back and defend,” he added.

Man United are 3.50 to win the Premier League this season, while Lukaku is now 4.00 to be leading goalscorer.