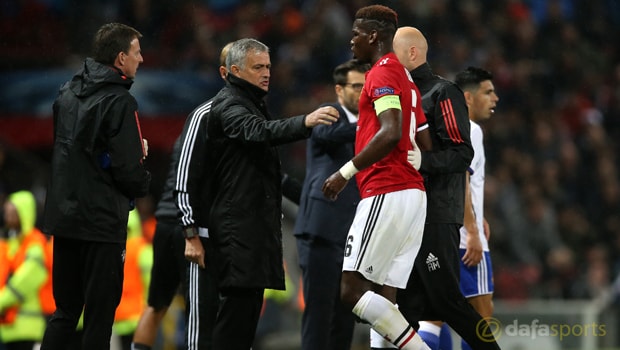 Manchester United midfielder Paul Pogba could be out of action for a few weeks after sustaining an injury in Tuesday’s Champions League victory over Basel, according to boss Jose Mourinho.

The Red Devils, who are priced at 3.50 to win the Premier League, made the perfect start to their European adventure on home soil as they cruised to a 3-0 triumph against the Swiss outfit.

Marouane Fellaini, Romelu Lukaku and Marcus Rashford all bagged at Old Trafford but the victory appears to have come at a price.

Pogba had to leave the field just 18 minutes into the Group A clash after suffering a suspected hamstring injury.

United’s medical team will assess the former Juventus midfielder over the coming days and he will undergo a scan but Mourinho has admitted Pogba could be ruled out for “a few weeks”.

“I don’t know (what the severity is),” Mourinho told MUTV.

“It looks for me too (like a hamstring injury) but I haven’t spoken yet to the medical department.”

Meanwhile, Mourinho was also critical of United’s performance after they took a 2-0 lead and feels they were guilty of playing “fantasy football”.

He added: “We could have put ourselves in trouble. We were playing fantasy football, Playstation football. I don’t like it – flicks and tricks.

“We gambled and you have to respect your opponent. I don’t know if goal difference will play a part.

“We lost position, our shape, we lost balls in easy situations. I didn’t like it – the players relaxed too much.”